Instead, the first African American woman nominated to be attorney general cast herself as a career federal prosecutor determined to uphold the rule of law and willing to provide honest counsel to the president even when he might disagree.

In calm, polished replies, Lynch also acknowledged Republican concerns and pledged to foster a better relationship with lawmakers if confirmed.

“You’re not Eric Holder, are you?” Sen. John Cornyn (R-Tex.) asked at one point. 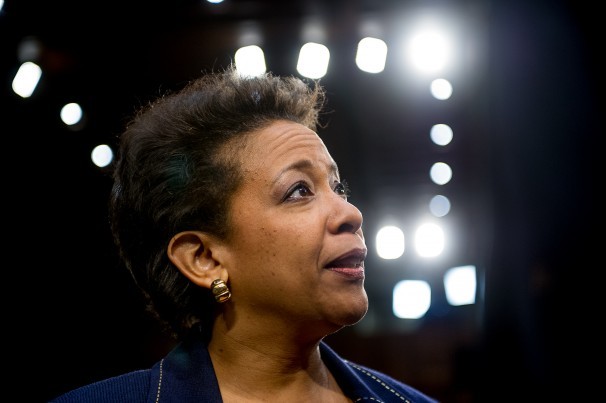 Lynch, 55, the U.S. attorney for the Eastern District of New York, said she supports the use of the death penalty as an effective punishment and considers waterboarding “torture and thus illegal.” She said it was the Justice Department’s job to enforce the laws Congress passes, but when pushed about Holder’s decision not to defend the federal Defense of Marriage Act, she said there are “rare instances” when careful analysis of existing laws raises constitutional issues.

Immigration proved to be the most significant flash point during the hearing, with Republicans voicing continuing outrage over the administration’s executive actions.

At the start of the Senate Judiciary Committee hearing, which was interrupted many times as senators left to vote, Chairman Charles E. Grassley (R-Iowa) asked whether the president could defer deportations “for millions of individuals in the country illegally and grant them permits and other benefits, regardless of what the U.S. Constitution or immigration laws say.”

Lynch said that it was important for the Justice Department to ensure that any executive action be legal but that she was not involved in the decisions leading up to the president’s actions.

Referring to a Justice Department memo on the president’s authority on immigration matters, she said, “I don’t see any reason to doubt the reasonableness of those views.”

Sen. David Vitter (R-La.), who has said he plans to vote against Lynch, said he was “very disappointed and frustrated” with her responses.

“I have a huge concern regarding what I think is the president’s illegal, unconstitutional executive amnesty, and I have a huge concern of the fact that you think it is within the law,” Vitter said. Sen. Jeff Sessions (R-Ala.) agreed with Vitter and said after the hearing that he will vote against Lynch.

Lynch is the first Obama Cabinet nominee to face a confirmation hearing since Republicans took over the Senate this year. The department she has been selected to oversee has been a regular target of Republicans’ ire on a range of issues, including investigations into the Internal Revenue Service and the attacks in Benghazi, Libya, and a botched gun-trafficking operation run by the Bureau of Alcohol, Tobacco, Firearms and Explosives.

Sen. Charles E. Schumer (D-N.Y.) asked his colleagues not to “turn this exceptional nominee into a political point-scoring exercise” by badgering her on immigration and the controversy over the investigation into the IRS.

He described Lynch as “one of the keenest legal minds that our country has to offer, someone who has excelled at every stage of her education and her career, while cultivating a reputation as someone who was level-headed, fair, judicious and eminently likable.”

Holder — whose six-year tenure overshadowed Wednesday’s hearing — had a particularly rocky relationship with Congress. Lynch has chaired the Justice Department committee that advises him on policy decisions.

Among the points of contention between the administration and Congress has been the Justice Department’s policy on marijuana in response to the legalization of the drug in Colorado and Washington state. The department announced that it would not challenge those state laws and said that in prosecutions it would prioritize marijuana offenses­ such as distribution to minors.

Asked about her own views on marijuana, Lynch said she does not support legalization.

Sessions asked Lynch whether she agreed with a remark made by President Obama — and published last year in the New Yorker magazine — that the drug was no more dangerous than alcohol.

“I certainly don’t hold that view and don’t agree with that view of marijuana,” Lynch said. “I certainly think that the president was speaking from his personal experience and personal opinion, neither of which I’m able to share.”

When pressed on the legality of the National Security Agency’s controversial surveillance programs, Lynch replied that she believed they were “constitutional and effective.”

If Lynch is confirmed as the 83rd attorney general, she will take the reins of the Justice Department at a moment of high tension between law enforcement and minority communities across the country.

In her testimony, she emphasized her strong bonds with law enforcement and her desire to heal the rifts between police and the communities they are tasked with protecting.

One of her priorities, she said, will be to work to strengthen “the vital relationships between our courageous law enforcement personnel and all the communities we serve.”

“In my career, I have seen this relationship flourish — I have seen law enforcement forge unbreakable bonds with community residents and have seen violence-ravaged communities come together to honor officers who risked all to protect them,” Lynch said. “As attorney general, I will draw all voices into this important discussion.”

Lynch was accompanied by her husband, Stephen Hargrove; her father, the Rev. Lorenzo Lynch, who traveled from Durham, N.C., and sat behind her; and her only surviving brother, Leonzo Lynch, who is a preacher in Charlotte. Her other brother, Lorenzo Jr., a former Navy SEAL, died in 2009. She placed his Navy SEAL trident pin on the witness table in front of her while she testified.

A group of two dozen of Lynch’s fellow U.S. attorneys from across the country were in Washington, watching the hearing together on television from the Justice Department building. In the audience at the hearing was a group of Lynch’s Delta Sigma Theta sorority sisters, dressed in bright red.

Lynch told the committee about her family and the values instilled in her by her parents, both from North Carolina.

“My mother, Lorine, who was unable to travel here today, is a retired English teacher and librarian for whom education was the key to a better life,” Lynch said. “She recalls people in her rural community pressing a dime or a quarter into her hands to support her college education. As a young woman, she refused to use segregated restrooms, because they did not represent the America in which she believed.”

“She instilled in me an abiding love of literature and learning, and taught me the value of hard work and sacrifice,” Lynch said.

Lynch’s father, a fourth-generation Baptist preacher, opened his Greensboro church in the early 1960s to those planning sit-ins and marches­, standing with the protesters while carrying her on his shoulders.