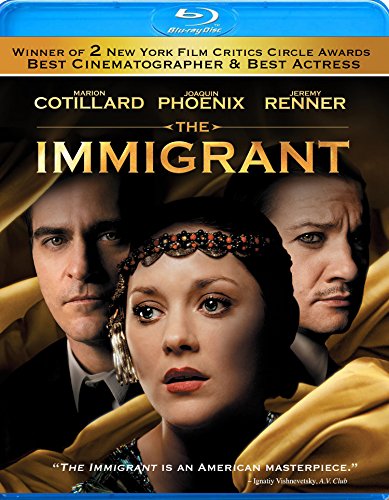 One of the casualties of the 2014 awards season was James Gray’s The Immigrant. While Gray has worked with Joaquin Phoenix and other big Hollywood stars during his entire career, The Immigrant was seen by some as his first masterpiece. Still, for whatever reason, The Weinstein Company never gave the film the same kind of awards season push it gives other high-profile movies, and it was dumped in theaters during the summer.

After its incredibly short theatrical run, the film was then posted on Netflix in the fall. That left some of the film’s fans wondering if we would ever see a physical release at all. Thankfully, TWC felt nice enough to give us one. The Anchor Bay Blu-ray hits stores on Tuesday, April 7.

I reviewed the film in June, when it did make its theatrical release. At the time, I gave it a glowing review and I still feel that it is a really good movie, coming close to a masterpiece. It doesn’t quite reach the level of other iconic immigrant stories that have been told in film, but the performance by Marion Cotillard is heartbreaking and Darius Khondji’s acclaimed cinematography is stunning.

Cotillard stars as Ewa, a Polish immigrant who arrives at Ellis Island in 1921 with her ill sister. Thankfully, Ewa can speak English, but that skill doesn’t save her from the fate many immigrant women face. Bruno (Phoenix) sees her and tricks her into coming with him. At first, she thinks he can help her get a real job, but it’s soon obvious that he’s just a pimp who believes he’s something more. Later, Ewa meets Bruno’s cousin, magician Emil (Jeremy Renner). Bruno and Emil have a violent relationship, as the two collide over Ewa.

Since The Immigrant is still available to stream on Netflix, it’s hard to recommend the Blu-ray to those who haven’t seen the movie. It is definitely a film one has to see first before committing to including it in their collection permanently. That said, fans of the film will appreciate the Blu-ray because it preserves the stunning visuals of the film. This is one gorgeous movie and it’s a shame that more people didn’t get to see it on the big screen.

Extras are a bit thin. The only video extras are the trailer and a short two-minute featurette with Gray discussing photos and paintings that inspired the film’s look.

Gray’s commentary though is worth the price of admission, as he goes into the technical details of the film and discusses the differences in acting styles that clash when Cotillard and Phoenix are on the screen. He also admits to some of the heavy-handed flaws in the film and explains why it was such a personal story to tell. It’s also interesting to hear him say that, while he does admire the work of Gordon Willis on the first two Godfather films, he wasn’t really inspired by that look. The Immigrant looks the way it does because of the time period, not because Gray was trying to mimic his film idols.

The Immigrant will go down as one of the forgotten classics of 2014 (even though the film was technically made in 2013 and premiered at the 2013 Cannes Festival). The film’s treatment was sad to see… and don’t even get me started on the garish poster.