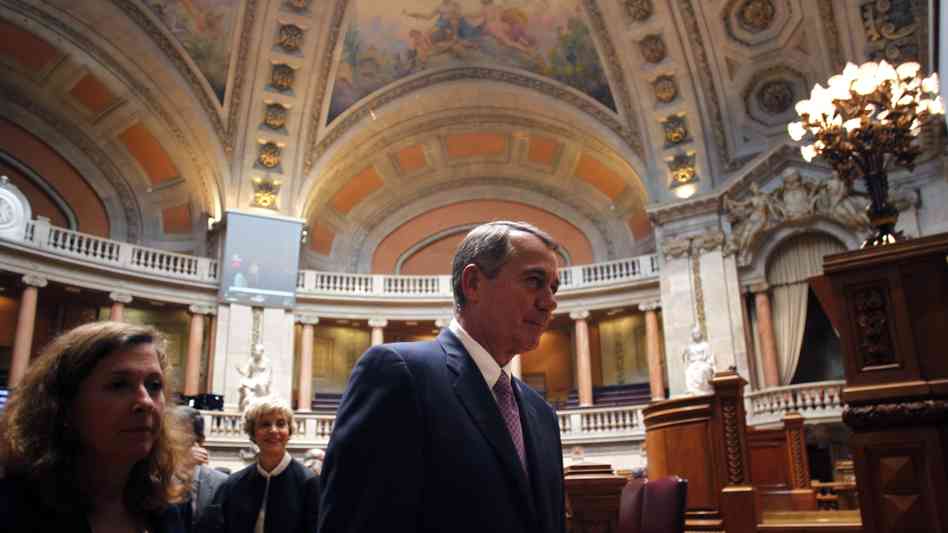 hide captionHouse Speaker John Boehner leaves the chamber of the Portuguese Parliament during an April 17 visit in Lisbon. Boehner was in Lisbon as part of an international trip that included visits to Afghanistan and Abu Dhabi.

House Speaker John Boehner leaves the chamber of the Portuguese Parliament during an April 17 visit in Lisbon. Boehner was in Lisbon as part of an international trip that included visits to Afghanistan and Abu Dhabi.

Voting to overhaul the nation’s immigration laws would be a difficult vote for many House Republicans at any time, but especially in an election year.

Which explains why many of them don’t want the issue to come to the floor this year for a vote.

In comments he made at a Rotary Club appearance in Ohio on Thursday, Speaker John Boehner, R-Ohio, took his fellow House Republicans to task for this reluctance, even mocking them for their faintheartedness.

“Here’s the attitude: ‘Ohhhh, don’t make me do this. Ohhhh, this is too hard.’ You should hear them,” Boehner told an audience in Madison Township, as he pretended to be a skittish member of the Republican conference.

Boehner has repeatedly stated his desire to pass legislation to overhaul the nation’s immigration laws. As leader of the GOP’s establishment wing, Boehner has expressed concern that failure to act would continue to hamper the party’s efforts to attract more Latino voters. Chamber of Commerce Republicans have also criticized the current system for making it difficult for them to get skilled workers from abroad.

The Senate passed a comprehensive immigration overhaul bill last year that, among other things, would create a citizenship path for the estimated 8 million immigrants now in the U.S. illegally.

The House, however, has refused to consider the Senate’s comprehensive bill. Leaders of the GOP-controlled House have said if they take up an immigration overhaul, it would only be on a piecemeal basis.

Democrats and immigration advocacy groups have tried to increase the pressure on House Republicans to pass immigration legislation this year. Even during his trip to Asia, President Obama didn’t let up. At a naturalization ceremony for 20 U.S. service members and their spouses in South Korea, Obama said: “This is a huge advantage to us, the talent that we attract. We don’t want to make it harder; we want to make it more sensible, more efficient. That’s why I’m going to keep on pushing to get this done this year.”

Boehner has said he would like to get immigration legislation passed by the House this year even though it’s unusual for legislation that creates a tempest — like immigration bills to give legal status to people in the U.S. illegally — to come up during an election year.

In mocking the trepidation of many in the Republican conference, the speaker suggested they should follow his lead and show some fortitude on the issue.

“I’ve had every brick and bat and arrow shot at me over this issue just because I wanted to deal with it,” he told the Rotary audience. “I didn’t say it was going to be easy.”

Boehner has had to deal with a vocal if small group of Tea Party-linked Republicans both inside and outside Congress who would like to see him ousted as speaker. And he faces three Republican challengers in his own May 6 primary contest.