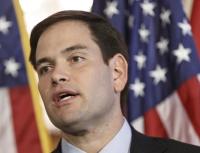 MIAMI — Two years ago, immigration activist Gaby Pacheco got a call from Marco Rubio. The Florida senator wanted advice as he developed a plan to help people like her: immigrants brought to the United States illegally as children.

Now, Pacheco is aghast that Rubio is taking a harder line on illegal immigration. The potential 2016 Republican presidential candidate has abandoned the sweeping bill he helped write and is calling for an end to the Obama administration program that lets Pacheco stay in America.

“It’s another Marco Rubio that I just don’t know,” she said.

After the first-term senator saw his political standing fall among conservatives who balked at his immigration advocacy, Rubio is focusing on border security — more in line with the GOP activists who wield influence in how a White House nominee is picked.

Last month, Rubio urged President Barack Obama not to take actions that would shield from deportation millions of people who entered the U.S. illegally. Congress, Rubio said, should first “make real progress on stemming the tide of illegal immigration.”

Rubio’s aides say the senator always has stressed border security and that he insisted on tougher enforcement measures as a condi-tion for his Senate vote last year.

Immigrant advocates contend that in emphasizing only border security and dismissing his own bill, Rubio is effectively switching sides in the heated debate.

The shift comes as potential 2016 rivals such as Sens. Ted Cruz of Texas and Rand Paul of Kentucky, who voted against the overhaul that Rubio helped write, take hard-line stands on immigration.

Rubio has begun visiting South Carolina and Iowa, early-voting states in the 2016 nominating calendar where immigration is an important test for White House hopefuls.

Rubio was the only potential GOP candidate who helped write the immigration bill, which would strengthen border security while also offering a way to citizenship for many of the 11.5 million people who are in the U.S. illegally.

Now, in a sign of how much the political climate has changed, the party committee that is working to elect Republicans to the Senate is using that bill, which more than a dozen Republicans back, in ads to attack Democrats as pro-”amnesty.”

On a recent tour through central Florida, an important swing-voting region with a fast-growing Latino population, Rubio told reporters in English and Spanish that his emphasis on border security is an acknowledgment that House conservatives do not support a comprehensive immigration bill.

“The votes aren’t there,” Rubio said. “You’re going to have to deal with the border first. Otherwise, we’re going to continue to beat our head against a wall here for another decade without any changes or any progress.”