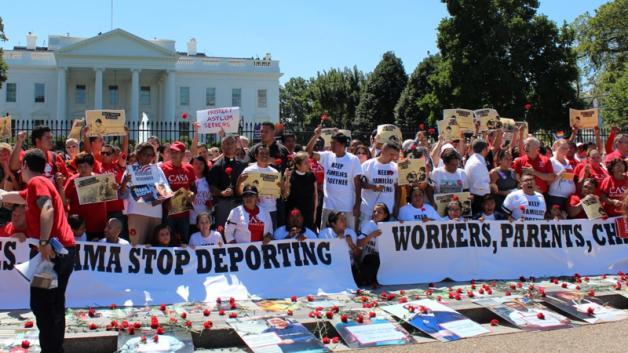 WASHINGTON, DC – Filipino American Christine Poquiz was among the 150 immigrant rights activists, elected officials, labor and religious leaders arrested in front of the White House on August 29, asking President Obama to provide relief to families and immigrant workers as part of his announced review of U.S. immigration policies.

Poquiz and a dozen other Filipino American activists marched with more than 1,000 protesters to the White House where they staged the largest civil disobedience protest in immigrant rights history.

“The Philippines has the longest waiting time of any country because of the outdated visa system in the U.S. Some of us have been waiting over 20 years,” Poquiz explained.

Before marching to the White House, the demonstrators led by Casa of Maryland and Casa of Virginia – two leading immigrant rights advocacy groups – rallied in front of the Immigration and Customs Enforcement (ICE) headquarters in Washington, DC.

Among the participants were children who wore T-shirts that pleaded: “Don’t Deport My Mom.” Speakers took turns lambasting the Republicans for their inaction.

They also prayed for Obama to reverse his immigration policies before deportations during his administration reach two million, which would surpass the number of deportations that occurred under President George W. Bush.

Ben de Guzman, co-director for programs at the National Queer Asian Pacific Islander Alliance (NQAPIA), was among dozens of Asian Pacific Americans also at the rally. “With President Obama inching closer and closer to his self-imposed timeline of the end of the summer to announce executive action he will take on immigration, every opportunity we take now to call for the change we need becomes ever more important,” he said. 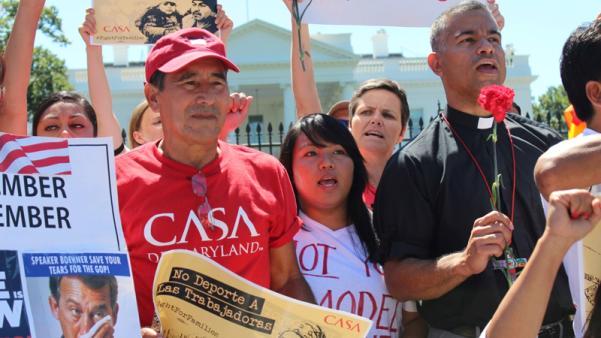 De Guzman added: “Filipinos have a stake in this fight to fix our broken immigration system and the changes that we are calling for will keep families together. LGBT Filipinos know all too well that the 11 million undocumented need relief as well. Jose Antonio Vargas is well known, but the LGBT undocumented population is disproportionately Asian, and his story is more the norm in our community than we might want to admit.”

Immigration advocates have been pressuring Obama to use his executive powers to protect many of the 11.7 million undocumented immigrants currently living in the U.S. from deportation.

Obama did just that for undocumented young immigrants when he announced the Deferred Action for Childhood Arrivals program in 2012. The program allows undocumented youth to stay and work in the U.S.

‘Not your model minority’

With banners and signs urging Obama to “Stop the Deportations,” most of the demonstrators gathered for the noontime rally at Lafayette Park across the President’s residence while a smaller group sat near the White House fence chanting “No Justice! No Peace!” and “Si Se Puede” (“Yes We Can”).

Defying orders to move out of the area, the protestors were taken one by one by Park Police, handcuffed and brought in vans and buses to a detention facility outside the city. Released five hours later, each paid a $50 fine for holding an unlawful demonstration.

Poquiz, who was wearing a white T-shirt emblazoned with the words “Not Your Model Minority,” was among the first to be arrested and booked. “I volunteered to participate in this mass action because it is very important to me that we highlight the fact that Filipinos are adversely affected by our nation’s broken immigration system,” she said. “We need to speak up.”

Noting a lack of active engagement on this issue in the Filipino American community, the US-born daughter of immigrant parents from the Philippines said political education is needed to heighten awareness and move people to act. “We cannot afford to be indifferent while families are being separated and unjust immigration laws are destroying our communities.” 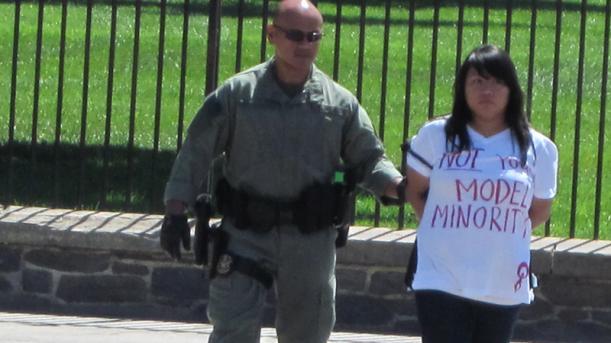 Christine Poquiz is arrested by Park Police during a mass civil disobedience protest in front of the White House. PHOTOS BY JON MELEGRITO

Poquiz was also worried that “many Filipina women work in the home as domestic caregivers where they are vulnerable to abuse and exploitation. Domestic caregivers face an additional barrier because it doesn’t count towards eligibility for citizenship the way other work does. We want the President to immediately address these two issues.”

Although this was her first act of civil disobedience, Poquiz had participated in several protest actions in the past, including a fast for immigrant women. “I know I’m very privileged to be able to participate in this civil disobedience and being safely detained and released in the same day. This is not close to the experiences of others from detention facilities to the protests happening in Ferguson.”

She added: “. At the end of the day it was an amazing experience to go through with my brothers and sisters in the struggle, particularly all the fierce AAPI women who got arrested along side me.”