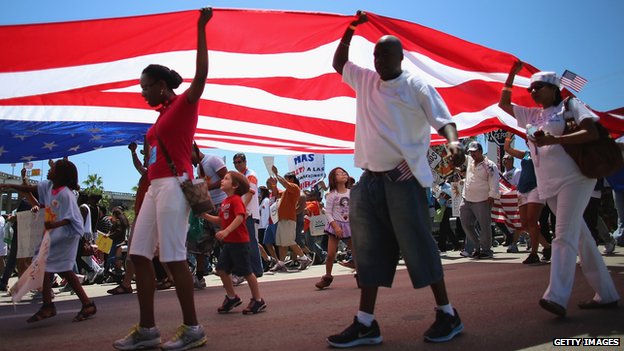 Florida has among the highest percentages of immigrants in the US

An undocumented Mexican immigrant who arrived in the US as a child cannot practise law in Florida, the state’s supreme court has ruled.

The court found current law denied Jose Godinez-Samperio a law licence because he was not “legally present” in the US.

One of the justices urged Florida’s legislature to pass a law undoing the court’s “inequitable conclusion”.

In a parallel situation, an undocumented immigrant in California was granted a law licence in January.

Sergio Garcia, who arrived in the US nearly two decades ago without papers, passed the California bar exam in 2009.

But he was not admitted to the bar until California passed a law allowing undocumented immigrants to gain law licences.

The issue came before both states after the Obama administration allowed some immigrants who had arrived illegally as children to remain in the US without fear of deportation and to gain work permits.

In a concurrent opinion, Justice Jorge LaBarga said he only “reluctantly” sided with the other justices. 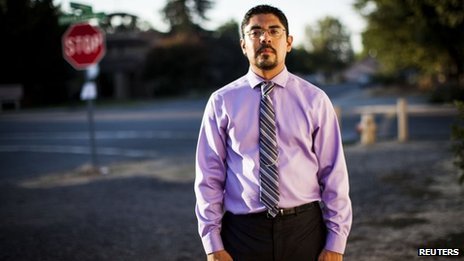 Mr LaBarga said the Florida legislature could pass a law similar to California’s that would pre-empt the federal ban but said the state “had chosen not to act on this vital policy question”.

The judge, who will become Florida’s first Cuban-American chief justice in July, said he and Mr Godinez-Samperio shared similar backgrounds but with an important exception: the judge arrived from Cuba in the wake of the Cuban missile crisis and was unimpeded from gaining citizenship.

“Applicant, however, who is perceived to be a defector from poverty, is viewed negatively because his family sought an opportunity for economic prosperity,” Mr LaBarga wrote.

“It is this distinction of perception… that is at the root of Applicant’s situation.

“[Mr Godinez-Samperio] is so near to realizing his goals yet so agonizingly far because, regrettably, unlike the California Legislature, the Florida Legislature has not exercised its considerable authority on this important question.”

Mr Godinez-Samperio told the Miami Herald he would continue to work as a paralegal, while his lawyer had already begun lobbying Florida legislators to pass a law similar to California’s.