“The number of people coming from the peninsula to settle in Sabah since 1963 has been negligible.” 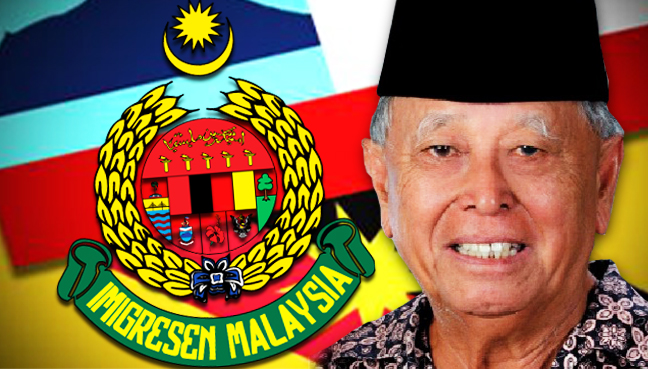 KOTA KINABALU: Former Sabah Chief Minister Harris Salleh, under attack from all sides for allegedly weakening Sabah’s immigration powers during his time, has called for the remaining controls between Sabah, Sarawak and the peninsula to be scrapped.

He also wants the Parti Bersatu Sabah (PBS) and the Parti Keadilan Rakyat (PKR) to find out from the Singapore Government why it has banned Orang Asal youths, below 35 years, from working on the island, instead of picking on him. “We are nitpicking when the rest of the world is going borderless.”

“The number of people coming from the peninsula to settle in Sabah since 1963 has been negligible,” reiterated Harris in justifying his proposal. “The controls on the movement of our people between the peninsula, Sabah and Sarawak are unnecessary, even politically.”

“Malaysia is a developing nation. We need a free flow of people to help build up the country.”

He was rebutting statements by PBS and PKR that he was wrong in eroding Sabah’s immigration powers.

What will happen if the peninsula imposes immigration controls on Sabahans and Sarawakians?

The day will come, he warned, when Labuan would impose immigration controls on people entering the island from Sabah. “There are always two sides to a story. What is being presented now in the media is just one side of the coin.”

“Sabah contributes very little to Labuan,” claimed Harris. “Most of its visitors and business people are from Brunei, the peninsula, Sarawak and overseas.”

“So, in a tit-for-tat move, it can impose immigration controls on Sabahans entering the island.”

He was implying that Labuan should not be referred to as a loophole, in the immigration laws, allowing people to flood Sabah. He recalled that the Berjaya Government (1976-1985) scrapped the need for passports and ICs between the peninsula, Sarawak and Sabah “but the controls between the peninsula and Sabah were put back later, for some reason”.

He conceded that it was the decision of his Administration that visitors entering Sabah from Labuan need not produce passports and ICs. “It was the decision of the government of the day,” said Harris. “The decision was in accordance with the rule of law under parliamentary democracy which Malaysia practices.”

“Both Parliament and the Sabah Assembly decided.”

Harris, stressing that what has been done in the past can be undone, suggested that PBS bring up the matter of plugging all the loopholes in the immigration laws at the Barisan Nasional (BN) level, and later the Federal Cabinet, before proceeding to Parliament. “This is the rule of democratic law.”

“Of course there are other rules, some imaginary,” he added. “It’s not clear what rules that PBS and PKR are referring to.”