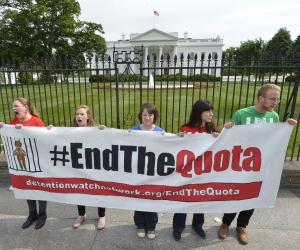 WASHINGTON, June 9 (UPI) –The Supreme Court narrowly ruled Monday that children who turn 21 while their parents’ immigration status is still pending have to go to the back of the line.

Justices ruled 5 to 4 to side with the Obama administration in finding that most immigrant children who turn 21 while their parents are waiting to obtain visas have to start the process over as adults.

Writing the majority, Justice Elena Kagan ruled that a law that allows some children’s immigration status to freeze, and thus preventing them from aging out, only applies to children in specific categories. Kagan agreed with the administration that allowing the law — the Child Status Protection Act of 2002 — to apply to all children would encourage too many young adults to enter the country ahead of others already waiting in line.

“Taken together, those two paragraphs prevent an alien from ‘aging out’ because of — but only because of — bureaucratic delays: the time Government officials spend reviewing (or getting around to reviewing) paperwork at what we have called the front and back ends of the immigration process,” Kagan writes.

“The months that elapse before USCIS personnel approve a family preference petition… do not count against an alien in determining his statutory ‘age,’” she continues. “Neither do the months a consular officer lets pass before adjudicating the alien’s own visa application… But the time in between — the months or, more likely, years the alien spends simply waiting for a visa to become available — is not similarly excluded in calculating his age: Every day the alien stands in that line is a day he grows older, under the immigration laws no less than in life.”

Justice Sonia Sotomayor, authoring a dissent joined by Justices Stephen Breyer and Clarence Thomas, argued that all children should be allowed to keep their priority status, even once they turn 21. Immigration advocates argue that doing so would increase wait time for others by just a few months, while according to the Catholic Legal Immigration Network, forcing an aged-out child back to the end of the line would increase his or her wait time by nine years.

“Aged-out children may retain their priority dates so long as they meet a single condition — they must be ‘determined.. to be 21 years of age or older for purposes of’ derivative beneficiary status,” Sotomayor writes. “Because all five categories of aged-out children satisfy this condition, all are entitled to relief.”

The case before the court, Scialabba v. Cuellar de Osorio, involves Rosalina Cuellar de Osorio, an immigrant from El Salvador who applied for a visa along with her 13-year-old son, who eventually turned 21 and was told he no longer qualified. The family won a challenge before the 9th Circuit Court of Appeals, a decision overturned Monday by the Supreme Court.