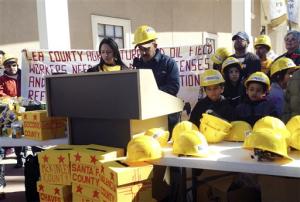 Members of an immigrant rights group brought 5,000 petitions to the Capitol and planned to deliver them to lawmakers and the governor along with 100 plastic hard hats signed by immigrant oil field workers and more than 700 small milk cartons with photos of immigrant families.

“We are tired of being attacked, and we don’t want to be the victim of political bullying anymore,” Arturo Donlucas of Lovington, who’s worked in a diary for 12 years, said at a news conference.

He spoke in Spanish and his comments were translated into English at what organizers billed as an “immigrant day of action” at the Capitol.

The governor’s license proposal has failed in the Democratic-controlled Legislature since Martinez took office in 2011, but the governor wants lawmakers to again consider it during their 30-day session.

As Martinez has pushed to restrict licenses for immigrants in New Mexico, a growing number of other states are moving in the opposite direction.

Eight states, including California, Illinois, Nevada and Colorado, enacted laws last year to grant immigrants the privilege to drive. However, some of those states haven’t started issuing licenses.

Unlike a New Mexico driver’s license, the newly enacted driving privilege cards and licenses in other states can’t be used for identification, such as boarding an airliner or entering a federal building

New Mexico and Washington have the broadest policies in the country because the same license granted to a U.S. citizen is available to immigrants, including those here illegally.

Rep. Paul Pacheco, an Albuquerque Republican, is sponsoring a bill backed by the governor that would allow temporary driver’s licenses for certain immigrant youths but stop the state from granting licenses to other foreign nationals without proper immigration documents.

The temporary licenses would be for immigrants covered by a federal policy deferring deportation. However, those licenses couldn’t be used as identification to meet federal requirements, such as at airports.

The current licensing system has been in place since 2003.

“The right thing is to repeal it,” Pacheco said in an interview. “It’s a public safety issue.”

At the news conference outside the Capitol, oil field worker Angel Escarcega of Lovington said he and his immigrant co-workers need driver’s licenses for their jobs.

Lawmakers who support the governor’s proposal, he said, are “letting the politics of fear and divisiveness get in the way of doing what’s right for our local community.”

Hagerman restaurant owner Leticia Mendoza, who recently became a citizen, said, “How does taking licenses away from immigrants help people like me start and grow small businesses, create more jobs and jumpstart my local economy?”

“Rural communities are dying in New Mexico. We need a vision for New Mexico, not fear mongering,” she said.