The debate of President Barack Obama’s executive order on immigration is just beginning, but a closer look at recent poll numbers suggests that, at the community level, a crucial divide may be looming in the suburbs.

People living in the biggest cities are supportive of the president’s move. Those in the exurbs and rural America are strongly opposed. But those in big suburbs appear to be taking more of a wait-and-see attitude. That breakdown of the issue comes from an analysis of the latest NBC News/Wall Street Journal poll from the American Communities Project at American University’s School of Public Affairs. 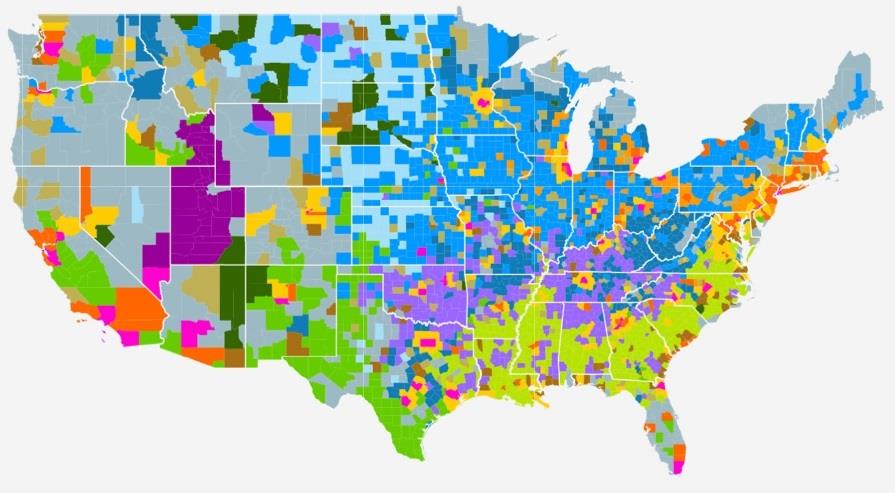 And, aside from policy implications, those differences indicate that Obama’s moves on immigration may carry power as a wedge issue in 2016 in places that matter.

Nationally, last week’s poll showed Americans were generally leery of the president acting alone on immigration. About 38% of Americans approved, while 48% disapproved. But in different kinds of communities the numbers looked quite different.

Big City counties, in pink on this map, were very supportive of Mr. Obama using an executive order. In those 46 counties, about 48% of Americans said they approved, or leaned toward approving, of the president acting alone. Only about 31% disapproved or leaned toward disapproving.

But in the Urban Suburbs, in dark orange on the map, the numbers were in between the national figure and the Big City figures – about 41% approved or lean toward approving, while about 44% disapproved or leaned toward disapproving.

That division sets up a critical few months on immigration, particularly on how Obama’s executive order is executed and perceived by the public.

When you look at election results in the broadest sense, the Exurbs are where Republican America begins. Rural America is, for the most part reliably Republican. That’s why the numbers around the Urban Suburbs in this last poll are worth noting.

The Urban Suburbs are a big part of the Democrats strategy for winning national elections. About 67 million people line in them and Mr. Obama won them by about 16 points in 2012. If people in those communities stay lukewarm or turn strongly against the order, that could create real problems in them for the Democratic presidential candidate in 2016.

If, on the other hand, the Urban Suburbs end up tilting toward the president on the executive order, the Republican candidate might find him or herself in the same position – forced to take a stance on something that appeals to the GOP base but pushes away Hispanics and those in the Urban Suburbs.

There’s still a lot of room for movement in the Urban Suburbs on this question. About 15% in those counties said they had no opinion or were unsure of how they felt about the executive order. That was one of the highest undecided in the poll and, again, it was in a set of counties where the difference between approval and disapproval was only about 4 percentage points.

The 2016 campaign is still a long way off, of course. And this latest NBC News/Wall Street Journal poll only had a big enough sample to deal with these big urban and semi-urban counties. But immigration likely isn’t going anywhere as an issue in the next few years.

This poll was taken just before Obama issued the order and the precise details of his plan were not known. The next set of polls will be crucial to seeing how the nation at large, and the Urban Suburbs in particular, reacted to Mr. Obama’s moves on immigration.