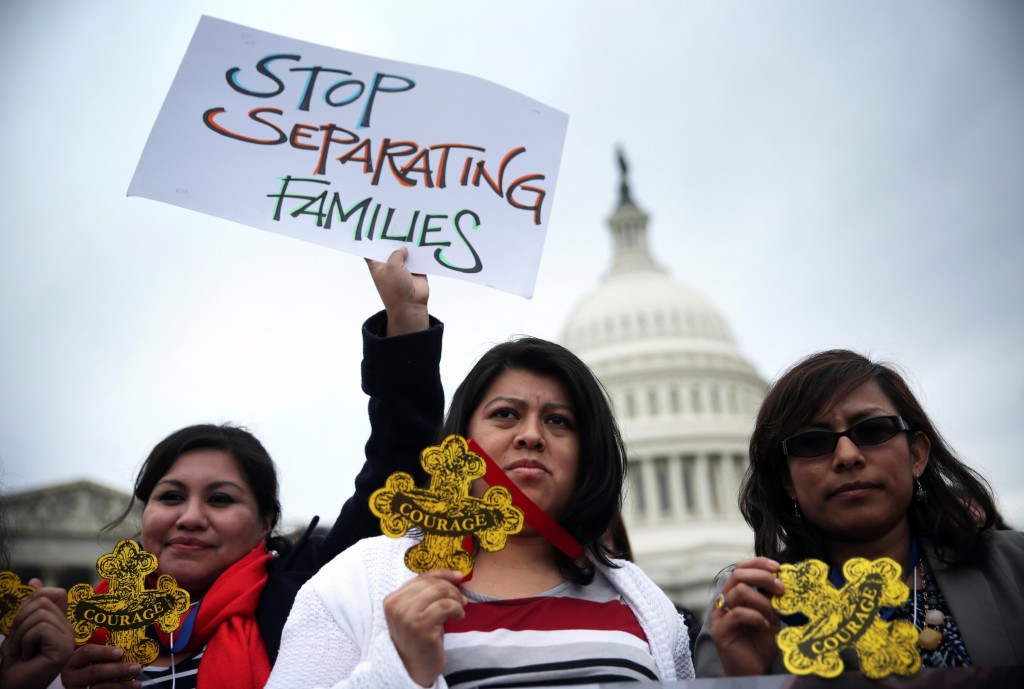 Natividad Gonzalez (C) of Clanton, Ala., and other immigration reform activists holds signs and “Badges of Courage” during a March 11, 2014 news conference on Capitol Hill in Washington, D.C. Photo by Alex Wong/Getty Images

President Barack Obama’s surprise announcement last week that his administration would change its deportation policy to become more “humane” shows how the immigration battle has narrowed after months of congressional deadlock.

As recently as last year, immigrant rights activists, along with an unusually broad coalition of business, labor and religious groups, were united in their demand that Congress pass a sweeping bill to both remove the threat of deportation from many of the 11 million people here illegally and eventually make them citizens. But now activists first just want to stop deportations.

They have pressured Obama to limit the number of people sent back overseas, which led to his administration’s announcement Thursday of a review of deportation policies after a meeting with the Hispanic Congressional Caucus. Activists also are pushing state legislatures to end participation in a program to help federal immigration authorities deport people and chaining themselves across entrances to local jails or immigration detention centers.

“We need relief and we need it soon,” said Reyna Montoya, 23, of Phoenix, whose father is fighting deportation and who co-wrote an open letter with dozens of other young activists urging immigrant rights groups to stand down on the citizenship issue. “People who are directly affected just want peace. Later on they’ll worry about becoming citizens.”

Immigrant rights groups still want legislation to grant citizenship for many who are in the U.S. without legal permission. But the prioritization of deportation relief shows the desperation felt by immigrant communities as deportations have continued, even as the president and many in Congress say they support changing the law to allow some of those people to stay in the U.S.

It also represents the possible splintering of the diverse coalition that long sought a single remedy to the nation’s immigration problems: one sweeping bill to expand citizenship. And the more aggressive, confrontational tactics also raise the risk of a public backlash.

“One picture of a cop with a bloody nose and it’s all over for these people,” Mark Krikorian of the Center for Immigration Studies, which favors greater restrictions on immigration, said of the activists.

The change comes after many expected Congress to pass a sweeping immigration overhaul last year. Republicans have been torn between some in their base who want to step up deportations and others alarmed at how Hispanics, Asians and other fast-growing communities are increasingly leaning Democratic.

The Senate in June passed a bipartisan bill to legalize, and eventually grant citizenship to, many of the 11 million people in the U.S. illegally. But the bill died in the Republican-controlled House. Republican leaders there floated a proposal that could stop short of citizenship for many people here illegally. But Speaker John Boehner, R-Ohio, acknowledged it stood little chance of passing.

Meanwhile, Obama’s administration is on track to having deported 2 million people during the past six years. Critics say that’s more than President George W. Bush’s administration deported, though some who push for a tougher immigration policy argue the Obama administration’s numbers are inflated.

Obama already has eased some deportations. In 2012, as he was trying to generate enthusiasm among Hispanic voters for his re-election, Obama granted people who were brought to the country illegally as children the right to work in the United States and protection from deportation if they had graduated high school or served in the military. Advocates are pressuring the president to expand that to other people here illegally. The administration has said it cannot make sweeping changes without Congress, and it is unclear what steps it will take after its review is completed to limit deportations.

Chris Newman, legal director of the National Day Laborer Organizing Network, said it’s inevitable that Obama makes changes. “This is a White House that has told the immigrant rights community that they had to build up enforcement massively to create the political climate for comprehensive immigration reform,” Newman said. “Well, that gambit failed.”

Roy Beck of Numbers USA, which pushes for a more restrictive immigration policy, said expanding deportation relief could also fail. “It looks radical,” he said of the notion of sharply limiting removals.

Activists are willing to take that risk and have grown tired of waiting for Washington.

Late last year the Austin Immigrant Rights Coalition’s members acknowledged there were no hopes of a big immigration bill anytime soon. They began pushing the local sheriff’s office to end its participation in the Secure Communities program, which checks the immigration status of anyone booked into local jail and refers people here illegally to federal authorities. Last month, six coalition members were arrested after locking themselves together to block entrance to the county jail.

“We decided we needed to change our focus because this is a more winnable campaign,” Executive Director Alejandro Laceres said. Of Congress, he added, “We don’t have the luxury of moving at their pace.”

In Arizona, activists have launched a series of protests, including blocking buses transporting immigrants to courts. “We just realized we are losing too many people in our community,” Carlos Garcia of the group Puente Arizona said in a telephone interview minutes before he was arrested outside the Immigration and Customs Enforcement office in Phoenix. Worries about whether their tactics could cause a backlash “go out the window,” he added. “Our heads hurt from thinking about the politics around it.”

At the state level, activists have had notable successes. The biggest victory came last year in California when Gov. Jerry Brown signed the Trust Act, barring California police from participating in Secure Communities. Immigrant rights groups are trying to replicate that legislation in Illinois and Massachusetts.

Driving the efforts are cases like Abel Bautista’s. He was stopped for traveling 8 miles per hour over the speed limit on a Colorado interstate in 2012 and has been fighting deportation ever since. At first he was not too worried, because he expected an immigration overhaul last year to make the case moot. Now he worries about the lack of legislative action and the trauma inflicted on his three U.S. citizen children as his case drags on.

“We’re just left hanging at loose ends,” Bautista said in an interview, recounting how his children’s performance at school has deteriorated and how they sob when he leaves for court hearings. “If the community unifies and has more demonstrations, maybe they will listen to us.”