IMMIGRATION: Fighting for their kids to stay in the country 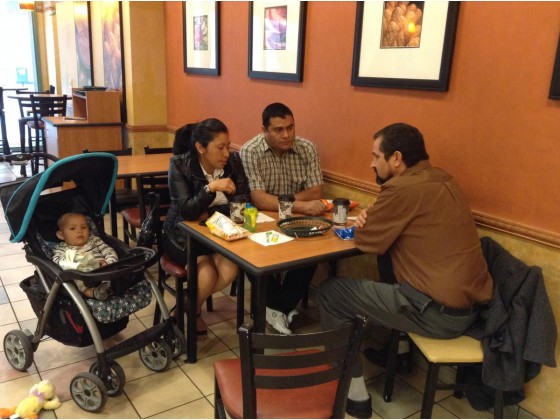 Immigration-court judges can order the deportation of a migrant who does not show up for a hearing.

About 80 percent of unaccompanied minors attended their first court hearing between July 18, 2014, and Feb. 24, 2015, according to the U.S. Executive Office for Immigration Review, which oversees immigration courts.

During that time period, judges ordered the deportation of 3,902 children in absentia, which means a hearing was conducted in the child’s absence. That is out of 20,316 cases in which there was a first hearing held.

Victor Nieblas, president-elect of the American Immigration Lawyers Association, said some children and their parents or guardians are not receiving the notices of court dates. Others are told to report to court in the border area where the child was apprehended, rather than near the child’s current home, he said.

When Guatemalan immigrants Elva Marroquín and Angel Rosales wake up every morning, they wonder whether that will be the day they find out their children will be deported.

Angel, 11, and Dulce, 8, are among the tens of thousands of Central American child migrants who last year left their violent homelands for the United States. Marroquín and Rosales are fighting in immigration court to keep their kids with them in their Rialto home. They fear the children will be killed if the U.S. government returns them to Guatemala.

Across the Inland area and the nation, the parents of other migrants are immersed in similar court battles and face the same uncertainty about their children’s future.

Nearly 60,000 cases involving children were filed in federal immigration court in fiscal 2014, nine times the number as in 2011, an illustration of the magnitude of the last few years’ influx of Central American kids, which peaked in 2014. The federal fiscal 2014 ended Sept. 30.

Rosales, 34, has lived in the United States since he illegally crossed the border into Arizona in 2008. Marroquín, 27, crossed into Texas in 2009. The married couple intended to return to their hometown in the Guatemalan highlands, so they left Angel and Dulce with the kids’ maternal grandparents. But, they said, the increasing violence there – Marroquín’s cousin was killed last year – led them to send for their children.

The three countries that were the source of most of the wave of child migrants are among the most dangerous. Honduras had the world’s highest homicide rate in 2012, according to a United Nations report released last year. El Salvador ranked fourth, Guatemala fifth.

Angel and Dulce were apprehended by the Border Patrol shortly after they crossed from Mexico into Texas in June 2014, when the phenomenon of Central American children arriving en masse in the United States exploded into the national consciousness with dramatic media images from the border.

Immigration authorities sent Dulce and Angel to Rialto to live with their parents until the government decides their fate.

Meanwhile, Marroquín and Rosales have been planning to apply for protection from deportation under an Obama administration program that a federal judge in February put on hold.

On March 11, Marroquín and Rosales traveled to immigration court in downtown Los Angeles for the second hearing in their children’s cases.

Daniel Guzman, legal-resources coordinator of Justice for Immigrants Coalition of Inland Southern California, picked them up at their Rialto home at 5:40 a.m. for the 9 a.m. hearing. Their trip in the pre-dawn darkness down I-10 took just over an hour, but they didn’t want to take the risk that an accident or traffic jam would make them late. Some judges deport children whose parents miss a hearing.

“I’m a bit nervous,” Rosales said in Spanish before the hearing as he sat with a cup of coffee at a Subway restaurant near the courtroom.

Marroquín sat next to him with their 18-month-old U.S.-born son Emmanuel. Across the table was Guzman, who in addition to driving the couple to court appointments explains the legal process to them and translates.

Rosales said he was even more nervous in January when a U.S. Citizenship and Immigration Services official in Anaheim interviewed Angel and Dulce. The children are requesting asylum, and the official asked them questions about their lives in Guatemala.