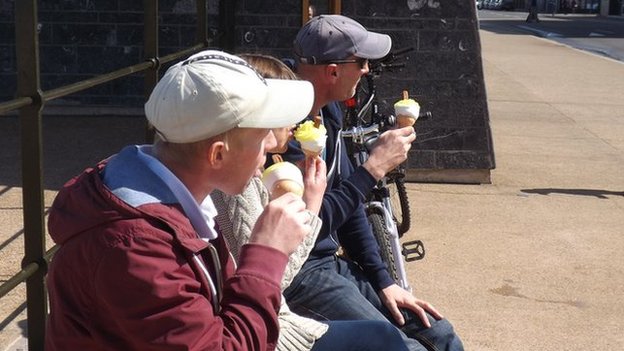 Visitors to Redcar enjoy a lemon top on the seafront

Immigration is a hot topic ahead of this month’s European elections, but how do voters see the issue in one of the UK’s most British towns?

For years in Redcar tourists and locals alike have licked their lips at the thought of a lemon top ice cream from Pacittos on the seafront, the sticky blob of sorbet proving an ever popular extra ingredient.

The fact that one of the town’s icons was imported to Teesside by an Italian family, however, is somewhat ironic given the area’s ethnic profile.

Redcar and Cleveland has the joint lowest rate of immigration in the UK, according to the last Census. Just 2.2.% of the borough’s population were born overseas.

Despite this, immigration is not far from the minds of voters ahead of this month’s elections.

On the high street, retired steelworker Andrew Morris knows what the statistics say about his hometown but his views are unchanged.

“I always think we should have listened to Enoch Powell. He said what would happen and it’s come to fruition and it’s only going to get worse with them opening the floodgates [to other places in the EU].

The top five parties in the North East European Election in 2009:

The result returned one MEP each for the top three parties based on the D’Hondt voting system.


“The man that’s speaking the most sense is Nigel Farage. Purely and simply he’s saying ‘give Britain back to us’.

“It might be fine for my generation and the next one but there’s a concern for the future.

“When I was growing up you could leave school and go into the steelworks or if you didn’t like the steelworks you’d go down the docks. It’s not like that now.”

Jobs matter in Redcar, not that migrants are rushing to the town to take them.

Much of the area’s industry is now specialist in sectors like petrochemicals and green energy while there is little in the way of agricultural work that often attracts a large immigrant workforce.

This is traditionally a Labour heartland but currently has a Liberal Democrat MP, Ian Swales, elected in 2010 amid widespread anger over the loss of steelmaking jobs at the Corus plant.

UKIP’s recent posters described “26 million people in Europe” looking for work and lots of shoppers in Redcar pledge to vote for the party. 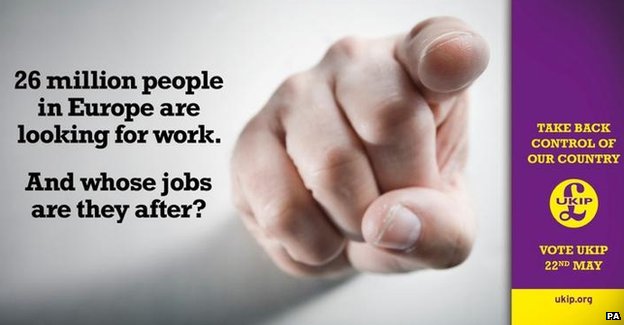 UKIP’s election posters were criticised by some

Support for UKIP is far from universal, however. One man angrily points out that “when times are hard people look to the foreigners for the problem”.

Candidates for 22 May’s vote largely agree on the reasons why people may perceive immigration as a problem despite the population figures.

Nigel Farage is not a man of the people, just because he goes and has a pint and a cigarette outside a pub”

Liberal Democrat Angelika Schneider puts it down to the “focus” of the media while Labour’s Jayne Shotton and Conservative Martin Callanan refer to a “drip feeding” of negative news stories and the “national narrative” respectively.

UKIP’s Jonathan Arnott disagrees and points out people living in Redcar are affected by the wider picture.

“Just because one particular place has a lower rate of immigration than other places nearby doesn’t necessarily mean that they aren’t competing for the same jobs.”


‘Control our own destiny’

UKIP, Mr Arnott insists, are not anti-immigration, but “anti-uncontrolled immigration”.

“Working class areas are disproportionately hit because there’s no limit to the amount of immigration from European countries,” he says. “The oversupply of labour is generally of those on the lowest incomes.”

Ms Shotton, for Labour, says her party is addressing the topics, including a lack of housing, that people blame on immigration.

“We’ve got a really hard job to do in getting out the message that UKIP isn’t the solution,” she says.

“Nigel Farage is not a man of the people, just because he goes and has a pint and a cigarette outside a pub. He’s a career politician and his wish to get out of the EU would be absolutely devastating for this region.”

She says: “I’ve been speaking to lots of businesses in the North East and there is a lack of skilled workers in some areas of the manufacturing sector.

“It’s an issue that can be addressed at a UK level through education and training but it’s a long process so immigration can be quite important.” 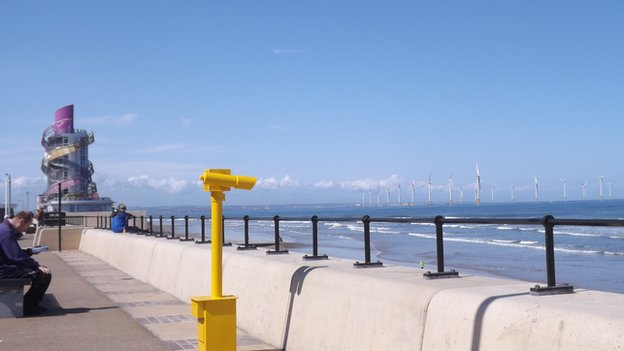 Drinkers in the Pig and Whistle pub squirm slightly when asked about immigration. It is a regular topic of conversation here, it seems.

Ken Jackson, from nearby Eston, says the perception that migrants are taking jobs that would otherwise be occupied by locals creates animosity.

Immigration though, he says, will always happen and in a global economy “people need to take jobs at the lower end of the market and be more realistic”.

“I don’t think we’ll come out of Europe but we need to control our own destiny,” he says.

Voters in the North East will have eight parties to choose from when they cast their vote on 22 May.

A full list of those standing is available on the BBC Politics site.


Further along the bar, landlord Nick Coulson says some people are “paranoid” about immigration, particularly, he says, since benefit reforms introduced by the coalition.

“They might think ‘I’m not getting as much money as I was because we’re supporting all these Poles and so on’,” he says.

In the 2009 European elections UKIP came fourth in the North East, securing just over 15% of the vote in a worse showing than they achieved nationally.

Mr Callanan, the only sitting North East MEP standing for re-election, with Labour’s Steven Hughes and Lib Dem Fiona Hall retiring, says the Conservatives accept that support for the EU is “wafer thin”.

“We think the relationship should be renegotiated so that Europe gets involved less in the micro issues and only deals with the super-national issues that it needs to.”

He suggests voters see European elections as being ripe for taking a free roll of the dice at the ballot box.

“In an election that people don’t perceive as being that important, wrongly in my view, they feel able to cast a protest vote. It doesn’t affect the running of the country as it were.

“It’s a kick to the political establishment.”

Just how hard a kick awaits that establishment in towns like Redcar remains to be seen.