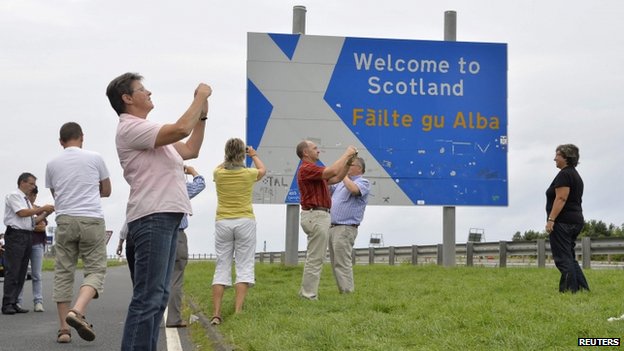 Would Scotland’s more tolerant approach to immigration continue if the numbers rose?

Immigration has risen to the top of the political agenda in recent years. While politicians at Westminster want to cut back on the number of people entering the UK, the policy in Scotland is to have more. Why the difference? And do people in Scotland support the need for more immigrants?

Last month Scotland’s education secretary Michael Russell rammed home the message that Scotland was not following the same path as the UK government by saying the debate south of the border was “being driven by UKIP and by a nasty xenophobia”.

His comments were dismissed by the UK government as “outrageous” and “ridiculous” but Mr Russell’s outburst illustrates the large political gulf between the attitudes of those in charge in Scotland and at Westminster.

The Conservatives in London have been pursuing policies designed to reduce net migration and even Labour at Westminster, which welcomed East Europeans a decade ago, has said it may have gone too far.

Add to that UKIP’s desire to take Britain out of the European Union and to close its borders to those from other EU countries and there is growing pressure to curb immigration in England and Wales.

But not in Scotland. Unlike almost every other Nationalist party in Europe, the SNP has set out in its White Paper the ways it would seek to increase immigration should it gain independence in September’s referendum. 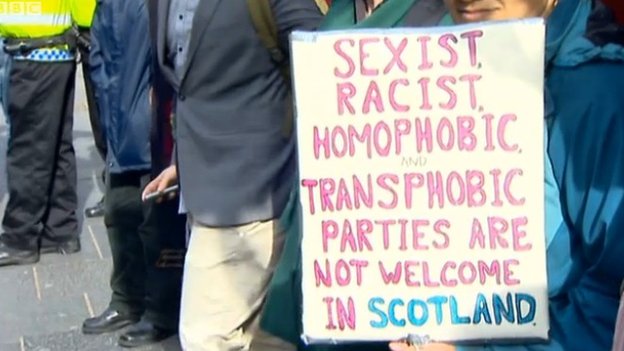 Demographics suggest Scotland’s population is ageing and, despite immigration-driven population growth over the past decade, the political consensus is in favour of migrants of working age coming in to take on jobs and set up businesses which can grow the economy.

The main opposition parties in Scotland are not opposing this part of the SNP’s independence plan and they agree that migrants can boost the economy.

But are the people of Scotland convinced by the argument? Do they share the views of their politicians?

Are the Scottish public really more accepting of immigration than people down south?

The Oxford University Migration Observatory has just undertaken what it says is the first major survey to ask people in Scotland about immigration to Scotland.

Scott Blinder, director of the observatory, says: “Pretty much all the previous work on Scotland has been based on small numbers of respondents and a small number of questions.

“People were making a lot of claims on the basis of very thin evidence.”

The observatory study, conducted by polling organisation YouGov, with more than 2,000 respondents in Scotland and a similar number in England and Wales found that Scottish attitudes to migration are different from the rest of Britain but “not massively different”. 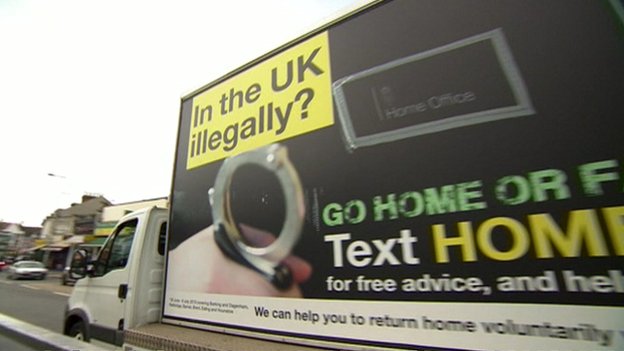 Dr Blinder says: “The majority of Scots (58%) would still like to see immigration reduced but it is a much smaller percentage than the rest of Britain (75%).

“In Scotland they are more likely to say immigration is good for Scotland, which is the reverse of the rest of Britain, and it seems to be a somewhat less important issue on the agenda for people in Scotland.”

The observatory’s finding are in line with a recent British Social Attitudes Survey which suggested that 78% of people in England thought the number of immigrants to Britain should be reduced and gave a figure for Scotland of 69%.

The new study asked people about various types of immigration such as bringing in high-skilled migrants, students or immediate family members of existing migrants.

Across the range of types of immigration Scottish people were less likely to want immigration reduced.

And although the numbers rose dramatically for reducing immigration for categories such as low-skilled migrants, extended family members and asylum seekers, they were always less than the figures for England.

It could be said that Scots do not seem to be “pro” immigration but they do appear to less “anti”.

Scotland has had historically low levels of inward migration and is generally not as densely populated as England.

A decade ago Scotland had the fastest falling population in Europe, with the birth rate at an all-time low and more people leaving the country than were arriving from overseas.

The population of Scotland was hovering just above five million at the end of 2003 after a decline of almost a quarter of a million in the previous 30 years. 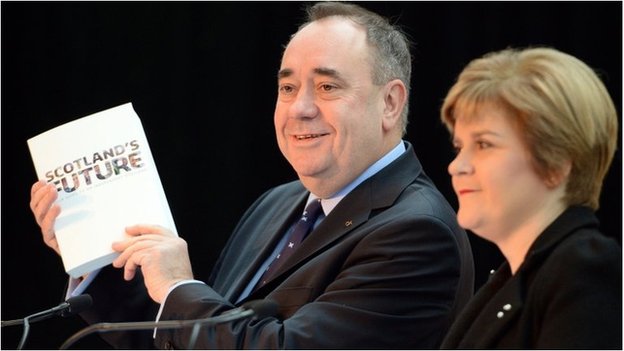 All the projections said the decline would continue but since 2004 there has been a dramatic change which has seen the Scottish population grow past its 1974 peak to its highest level ever.

The majority of immigrants to Scotland have traditionally been from Pakistan and India but over the past decade the number of people from Poland has risen from just a couple of thousand to about 60,000.

This rise coincided with removal of EU restrictions on Polish people having the freedom to work in other countries, a right which has recently been granted to citizens of Romania and Bulgaria.

Despite the rise over the past decade Scotland still has a relatively small immigrant population relative to England, especially London.

About 7% of Scots were born outside the UK, whereas the figure for the rest of the UK is almost 14%.

Robert Wright, professor of economics at the University of Strathclyde, says Scotland has not really been tested with mass immigration.

He says: “I think the difference between Scotland and the UK really boils down to the fact there has been less immigration in Scotland than the UK for a significant period of time. 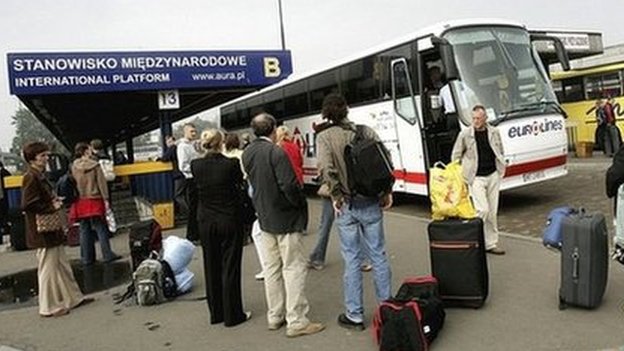 “So the fact I think there is more tolerance here is because there has been less of it. That does not mean there will be tolerance in the future when there is more immigration, so this will be a hurdle we have to jump later.”

Professor Christina Boswell, professor of politics at University of Edinburgh, agrees that tolerant immigration policies do not tend to be vote winners.

She says: “Even if at the moment the SNP, Lib Dems and Labour are largely supportive of a more liberal approach, in the event of independence, actually the temptation to break ranks and criticise and tap into public concerns about immigration would be quite high.”

Prof Boswell says this has been the experience across Europe where public attitudes have been largely quite sceptical and cautious about the benefits of immigration.

She says: “It is really quite easy and quite tempting for political parties to tap into those political concerns about immigration and try to mobilise support on the basis of an anti-immigrant position, or at least of a less liberal position on immigration.

“You don’t win votes by adopting a liberal progressive labour migration policy and, in fact, the Labour government in the UK has found that in the past few years and it has obviously had to backtrack on its more expansive policy of the early-2000s.” 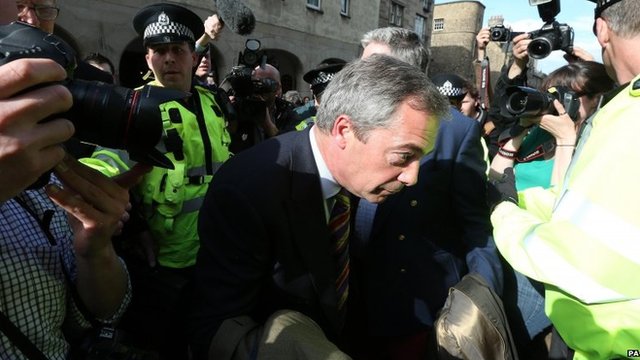 This is the same line taken by UKIP leader Nigel Farage when he visited Edinburgh last year, a trip which saw him swarmed by angry protesters and having to take refuge in a pub.

He said: “We heard these arguments in England, 10-15 years ago that we must have uncontrolled immigration into Britain to help the economy, and what we now have is thousands of youngsters in England unemployed and priced out of the jobs market.

“Immigration can be a very good thing for the economy but it needs to be controlled.”

Prof Boswell says there is much research to show that immigrants do not create high unemployment and generally do not create a high burden on the welfare state.

However, she says: “Immigration is often used as a lightning rod for channelling a lot of anxieties about employment, about welfare, about social cohesion.”

Prof Boswell adds: “It is much easier to sell the benefits of labour migration where an economy is facing very tangible acute shortages in particular sectors or regions.

“It is much easier as well to sell labour migration when it is about recruiting highly-skilled migrants.

“I think it is much more difficult for governments to make a case or sell the case for recruiting semi or low-skilled migrants.

“If it were to become a major issue of concern, for example with Romanian or Bulgarian immigration, then I would expect the SNP to water down its claims about a more liberal immigration policy, at least not to emphasise those in the election campaign because it clearly would not be a vote-winner.”