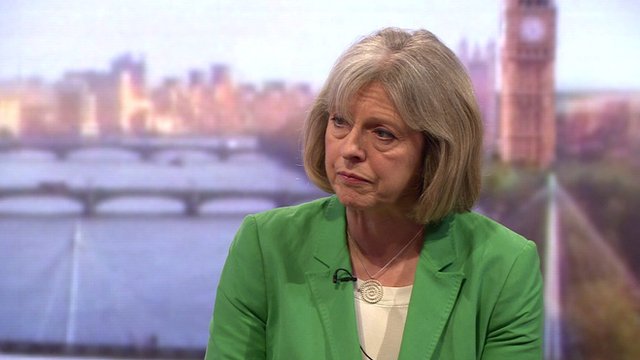 
Theresa May: Tightening up on benefits could reduce EU migration

Theresa May says she still has the target of cutting net migration to the UK to below 100,000, but admitted it had become “more difficult”.

The home secretary refused to admit the target would not be met by the 2015 election, even though the latest figures showed 212,000 more people moved to live in the UK than left.

And she outlined plans to act to cut down on immigration from within the EU.

Mrs May was speaking as the UK’s political parties await the results of the European Parliament elections, which are due after 22:00 BST on Sunday.

Mrs May said the coalition had “yet to get agreement” on the measures that should be introduced to reform the current system.

We haven’t yet got agreement across the coalition to do that. But these are the sorts of measures we keep looking at”

“It’s no surprise to anybody that there has been some long-standing, possibly heated at times, discussions among the coalition on issues of immigration,” Mrs May told the BBC’s Andrew Marr Show.

She said that if you excluded immigration from the EU, the migration figures were back down to 1990s levels, but the government recognised it needed to do something about European migration.

Tightening up on benefits was one of the government’s plans, she said.

Mrs May confirmed a report in the Sunday Telegraph that consideration was being given to deporting people who came to the UK to work, but who could not find a job after six months.

She said changes already coming in would mean EU migrants would have to be in the UK for three months before being able to claim benefits.

They were now looking at cutting the length of time migrants could claim benefits from six months to three months, she added.

“We haven’t yet got agreement across the coalition to do that. But these are the sorts of measures we keep looking at,” she said.

Theresa May’s acknowledgement that it has become “more difficult” to reduce net migration to the tens of thousands is a statement of the obvious, but it shows there is little ministers can do to control who arrives in the UK from the rest of Europe. The economic recovery here has brought a new wave of workers from countries like Poland and ministers are left tinkering with the rules on benefits for EU immigrants – they hope restricting eligibility further will deter some from coming and prove to British voters that the system is fair. The Liberal Democrats, Labour and the Conservatives have all promised to listen to the message voters are sending on immigration, but there’s little sign that radical policy changes are on the way.

The Conservatives went into the 2010 General Election pledging to “take steps to take net migration back to the levels of the 1990s – tens of thousands a year, not hundreds of thousands”.

But the Lib Dems stopped that pledge being included in the Conservative-Lib Dem coalition’s “programme for government” after the election, instead pledging to ensure immigration “is controlled so people have confidence in the system”. 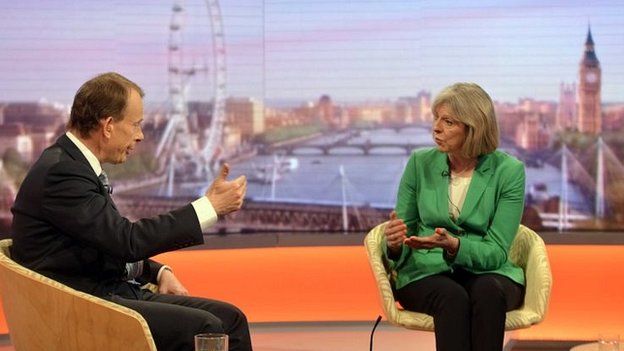 Although net migration fell early on in the coalition government, figures from the Office for National Statistics show that net migration bounced back to 212,000 in the year to December, from 177,000 the previous year.

“We still have that aim of the tens of thousands. But of course it has become more difficult and net migration is too high,” she said.

“That’s why I want to continue working to bring it down. In those areas we can control – that is, immigration from outside the European Union – everything we have done as a government has been having an impact.”

She said that net migration from outside the EU was now back at levels last seen in the 1990s.

Pressed on whether the government would make a “pledge” or a “promise” to reach its target, Mrs May responded by saying: “I’ve still got that target, it’s always been a target.”

Communities Secretary Eric Pickles was asked on the Sunday Politics whether he would admit that net migration would not be below 100,000 by the next election.

He said there would be measures announced soon and “it is our intention to move towards that target – we will do our damnedest to do that”.

When programme host Andrew Neil put it to Mr Pickles that the target was not going to be hit, Mr Pickles said: “I don’t know that to be fact – I cannot confirm that.”

The questions about immigration policy came in the wake of the English local election results which saw the UK Independence Party, which focused its campaign on leaving the EU and regaining control of UK borders, taking seats off the more established parties.

In response to Mrs May’s interview, shadow home secretary Yvette Cooper, for Labour said: “Theresa May says she is sticking to her net migration target yet it is badly failing and no one believes she has any chance of meeting it next year.” 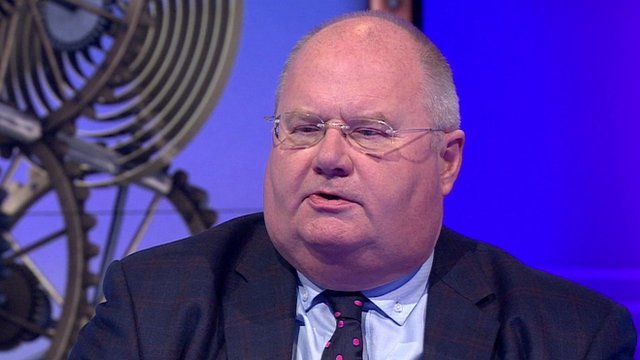 “For the home secretary to keep making big pledges and failing to meet them undermines trust in the whole immigration system.

“Having lost so many votes and seats while their net migration target is failing badly, the Tories seem to be rushing for more headlines before they have policies worked out.”