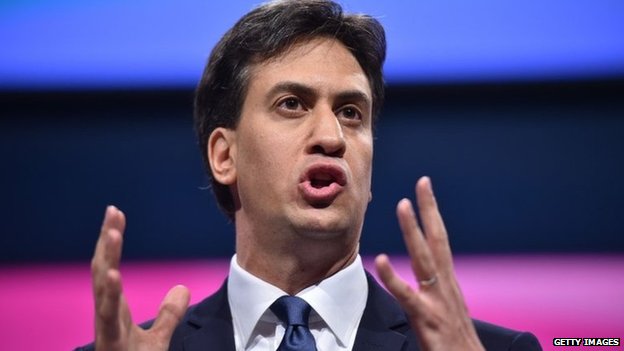 Ed Miliband has promised to bring in an immigration bill creating “clear, credible and concrete changes” within months, if Labour wins next year’s general election.

The party leader also said there would be an end to “false promises” on the subject if he becomes prime minister.

Official figures published in August showed UK net migration – the difference between those entering and leaving – increased by more than 38% to 243,000 in 2013-14. EU citizens accounted for two-thirds of the growth.

Mr Cameron has said his aim of reducing the figure to below 100,000 is still achievable.

In recent days, it has been reported that the coalition could seek an “emergency brake” to stop EU migration after it reached a certain level or to limit the number of National Insurance numbers issued to new arrivals from the EU.

Mr Miliband was speaking on a visit to Rochester and Strood, Kent, where a by-election is taking place next month following the defection of MP Mark Reckless from the Conservatives to UKIP.

Its predecessor seat, Medway, was held by Labour from 1997 to 2010, when the new constituency was established.

But a poll by ComRes suggests UKIP’s Mark Reckless is on course to win in Rochester and Strood, putting him on 43%. It places the Conservatives on 30%, Labour on 21% and the Liberal Democrats and Green Party both on 3%.

In his speech Mr Miliband reiterated Labour’s promise to count all people going in and out of the UK and make it a criminal offence when employment agencies recruit exclusively from abroad.

He added that he would improve and expand apprenticeships and ensure that “public sector workers in public-facing roles have minimum standards of English”.

These measures would be included in an Immigration Reform Bill, to be outlined in more detail in the first Queen’s Speech after a Labour victory next May, he said.

Mr Miliband also promised to “seek change in Europe”, including:

But he added: “False promises on immigration just make people more cynical about politics. I won’t be part of that. I will not make promises I can’t keep.”

Mr Miliband also said: “I will never propose a policy or a course of action which would damage our country. (UKIP leader) Nigel Farage wants to leave the European Union on which three million British jobs and thousands of businesses in our country depend.

“Those jobs and businesses include many here in Rochester and Strood, which has always traded with the world beyond.”

Mr Miliband also said: “Now David Cameron is also saying he is ready to leave the European Union and have Britain turn its back on the rest of the world.

“In doing so he is creating fear and uncertainty for British businesses which may be already losing out on crucial investment because of political games being played with our national interest.”

Mr Cameron told the BBC’s Asian Network that it was important for the UK “to continue to be a successful multi-racial country that celebrates the diversity that we have here in the United Kingdom”, while having “fair and controlled immigration”.

The Conservatives are expected to announce the name of their candidate for the by-election later on Thursday, having staged an open primary among voters to choose between councillors Kelly Tolhurst and Anna Firth.

UKIP advocates leaving the EU, which it says would reduce immigration dramatically. Leader Nigel Farage said on Wednesday: “To prevent or limit the free movement of people, you have to change the treaty itself and there is nobody in this European Union who says that is even on the agenda.”

The full list of candidates announced so far, in alphabetical order by surname, is: