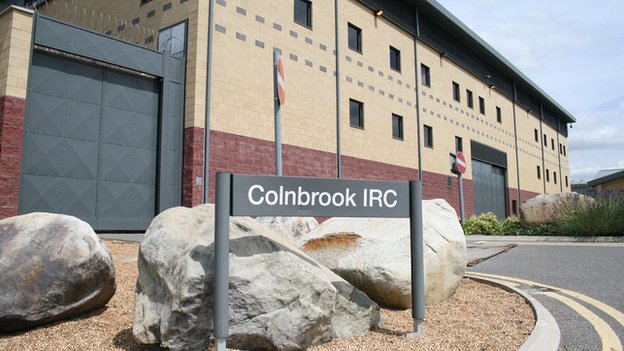 Immigration detention should be capped at 28 days, a cross-party group of MPs and peers has recommended.

Home Office officials are failing to follow guidance that immigration detention should be used sparingly, the MPs and peers said in a report.

The group said the lack of a time limit had significant mental health costs for detainees.

The government should consider alternatives such as allowing detainees to live in the community, it said.

The All Party Parliamentary Group (APPG) on Refugees and the APPG on Migration said there were considerable financial costs to the taxpayer because there is no time limit on detention.

It said the UK was the only country in the European Union not to have an upper time limit on detention.

The panel, which included a former cabinet minister, a former chief inspector of prisons, and a former law lord, considered evidence over eight months.

APPGs are informal cross-party groups that have no official status within Parliament.

Conservative MP David Burrowes, a member of the inquiry panel, said: “The lack of a time limit is resulting in people being locked up for months and, in some cases, several years purely for administrative reasons.

“While there is a need to properly control our borders, people who arrive by fair means or foul must also be treated with dignity and respect throughout the immigration process.

“The current system is failing to sufficiently do this and our report calls for an urgent rethink.”

Mr Burrowes said the UK should follow the example of other countries where rates of detention are much lower and removal rates much higher.

Women who are victims of rape and sexual violence should not be detained, nor should pregnant women, the group recommends.

It also recommended that screening processes are improved to ensure that victims of trafficking are not detained.

Paul Blomfield, chair of the panel and Labour MP for Sheffield Central, said: “Current Home Office policy is that detention should be used as a last resort and for the shortest possible time.

“From the evidence that we heard, Home Office standard practice falls well short of this policy.”

Refugee Council chief executive Maurice Wren said a “bright light” had been “shone into the darkest corners of the British immigration system and it has revealed some unpleasant secrets”.

He said: “Quite simply, the British government is detaining too many people for too long.

“In the current system, asylum seekers who have done nothing wrong find themselves arbitrarily placed behind bars, on the say so of Home Office civil servants, for one primary reason: because it’s politically expedient.

“Ministers must take this opportunity to pursue wholesale reform and abandon the existing structure of immigration detention which has been shown to be grossly inefficient, hugely expensive and in direct contradiction of our most cherished British values of justice, liberty and compassion.”