DRESDEN, Germany — Ahmed, a 36-year-old Moroccan, hoped to find a better life in Europe’s economic powerhouse, Germany. But these days in Dresden, he said, he is afraid to walk the streets.

This urban phoenix rebuilt from ashes after World War II is the center of a movement against immigrants — Muslims in particular — that has shocked much of the rest of Germany even as anti-immigration marches have spread to 10 cities nationwide. Downtown Dresden, Ahmed and other immigrants here say, has become a no-go zone for them on Monday nights, when the Patriotic Europeans Against the Islamization of the West — or Pegida, in German — stages its weekly rallies.

Since the movement was founded here last October, refugee advocates say the number of aggressive acts against foreigners has sharply increased. After one Pegida rally just before Christmas, for instance, demonstrators chased a group of young refugees, leaving a 15-year-old girl battered and bruised.

“When I go out, I put on a hat and wear it low over my face,” said Ahmed, a resident in a shelter for asylum seekers who was too frightened to give his last name. “I don’t want them to see I’m not from here.”

Devastated in a firestorm caused by Allied bombing in 1945, Dresden is a symbol of perseverance, emerging in the years after German reunification as a beacon for tourists drawn to its museums and beautifully reconstructed city center. But especially after the attacks in France staged by Islamist extremists this month, this city also stands as a bellwether of the friction between local communities and the fastest-growing religion in Europe: Islam.

Last year, Pegida was born amid a Europe-wide surge of asylum seekers, many of them arriving from war-torn Muslim countries including Syria and Libya. Germany alone received 200,000 new asylum applications in 2014 — a 60 percent jump from a year earlier.

Anti-immigrant nationalists have been soaring in polls from Britain to Hungary, France to Greece. But until the rise of Pegida, such voices had been largely drowned out in Germany — Western Europe’s most populous nation and a place where memories still run deep about what happened the last time the far right held sway in Europe.

Globally — according to a new Gallup poll previewed at the World Economic Forum in Davos, Switzerland — Europeans are the most negative on immigration in a world where most other regions, including North America, show a significantly higher level of tolerance. Europe had the highest portion of respondents, 52.1 percent, calling for a decrease in immigration as well as the lowest number, 7.5 percent, voicing support for increasing it.

Yet with a low birth rate and the need for more future workers to keep its factories humming, Germany has been something of an outlier in the region. It has adopted a relatively more positive official stance toward immigration — and witnessed less grass-roots opposition — than many of its neighbors.

As the movement has grown, tens of thousands of Germans also have risen up to condemn Pegida, taking to the streets in counter-demonstrations that have often been far larger that the anti-Islamic, anti-immigrant rallies they are opposing. Yet the Pegida movement has seemed to tap into a hidden vein of German angst.

Some here are worried not only about the new asylum seekers, but also about the growing numbers of other migrants entering Europe’s largest and strongest economy. Equally vexing to many is the lack of assimilation among a significant number of Muslim immigrants, some of whom came to Germany decades ago. Last September, for example, Germans were outraged after a stunt in the city of Wuppertal in which 11 devout Muslims wearing the words “Sharia Police” on bright orange vests approached Turkish nightclubs and cafes and warned young partygoers that they were violating Islamic law by drinking. 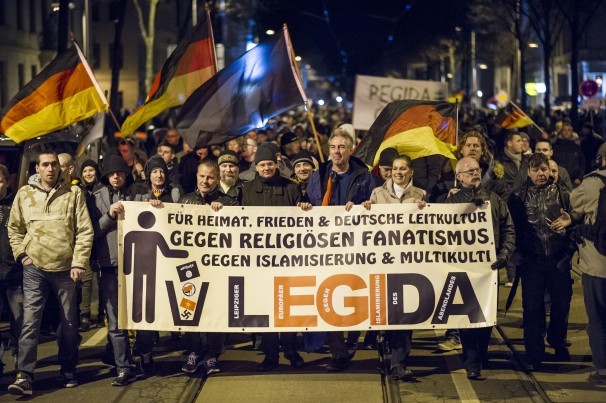 Such fears have surfaced as security concerns are mounting in Germany and across Europe over the threat of homegrown terror. As in France, hundreds of radicalized young Germans — many of them the second- and third-generation sons and daughters of Muslim immigrants — have left to fight with extremists in Syria and Iraq.

“How is it possible that parallel societies are forming in Germany?” Pegida spokeswoman Kathrin Oertel said on German TV last week. “That Islamic judges have the right to administer justice, and that Islamic schools are inciting hatred against German citizens?”

Nevertheless, senior German politicians — led by Chancellor Angela Merkel — have blasted Pegida supporters as intolerant extremists for whom there is no place in modern German society. “Every exclusion of Muslims in Germany, every general suspicion is out of the question,” Merkel said in the days after the Paris attacks. “We will not let ourselves be divided.”

Other politicians, however, have seemed to suggest subtly that Pegida may have a point. Thomas Strobl, an influential parliamentarian from the center right, called this week for Germany to quickly deport refugees who are without legitimate asylum claims. “If some countries carry out almost no deportations anymore, this verges on a surrender of the rule of law,” he told the Rheinische Post newspaper.

Yet the Pegida movement is also facing serious setbacks, raising doubts as to whether it may ultimately emerge as a true political force. In recent days, it has been plagued by infighting as its controversial leader, Lutz Bachmann — a former sausage seller and convicted burglar — was forced to step down. He resigned after leaks from his Facebook account showed he had referred to asylum seekers as “scumbags” and “animals.” Punctuating the leak was a photo of him dressed as Adolf Hitler — an image that, despite Pegida’s claims that the photo was meant only as satire, sparked widespread condemnations.

The wave of protests has brought new tension to German streets, including swarms of riot police seeking, sometimes in vain, to separate pro- and anti-Pegida demonstrators.

“We saw what happened 75 year ago,” said Willi Lübke, 64, a pharmaceuticals salesman who turned out on the streets of the nearby city of Leipzig on Wednesday night. He joined a crowd of 20,000 people rallying against Pegida, whose protest Wednesday evening in the same city drew roughly 15,000, according to police.

“I see these Pegida people now and I think, did they learn nothing from our history?” he said. “Germany now must be a place of acceptance and tolerance.”

Across a metal barrier and lines of riot police separating the two groups, Thomas Renner, 60, a taxi driver, insisted it was time for Germans to take a stand.

“This is not about racism but about control,” he said. In the Pegida crowds, one protester held a placard depicting Merkel in a Muslim veil. Another sign blamed perceived German woes on the “lying policies of the Synagogues.”

“They come here, wanting to force their mentalities on Germans,” Renner scoffed. “All these women in veils. We need a new immigration law.”

Nowhere in Germany are tensions running higher than in Dresden, where local authorities say the movement gained steam after they floated a proposal to add 12 new shelters for asylum seekers. German authorities have been totally overwhelmed by the surge, and have shuttled new arrivals to cities across the nation, including Dresden, to await processing. Yet the new faces particularly stand out in Dresden, where less than 10 percent of the population is non-German.

Dresden is also no stranger to far-right extremism in the streets. After the fall of the Berlin Wall, it became, for a time, a staging area for anti-immigrant skinheads and neo-Nazi groups. But Pegida’s ranks have included a more diverse grouping, including middle-class housewives and business owners. The movement has additionally become a hodgepodge of general discontent, tapping into old East German resentment in a part of the country with a higher unemployment rate than the national average. It has also become a home for both pro-Russian and anti-European Union sentiments.

According to the victim’s assistance group RAA Sachsen, racially motivated attacks in Dresden rose to 12 in October and December last year, four more than during the same period a year earlier. The immigrant community here was particularly rattled last week by the stabbing death of a 20-year-old asylum seeker from Eritrea. Police initially misidentified his death as a possible accident, later changing their assessment and opening a homicide case. The episode sparked indignation among immigrants as well as fears that the killing might have been a xenophobic attack.

As it turned out, one of the man’s Eritrean roommates confessed to the crime, a fact on which the Pegida movement immediately seized. “YOU ARE HIPOCRITES AND LIARS!” read a post on its Facebook page Thursday in a statement apparently addressed to those who had pointed the finger at its followers.

In a shelter for asylum seekers, though, fears had been building well before the slaying. A 26-year-old Moroccan, who gave his name only as Mustafa, said he was punched last year by a German man in a railway station, “just for being there.”

“This is not what I expected when I came to Germany,” he said. “In other parts of Germany, I think the people must be nicer. But not here. Here, they are against us.”

Deputy Mayor Dirk Hilbert, who has a Korean wife, said it is wrong to paint all of Dresden in the colors of Pegida.

“My wife has almost never had any negative problems here,” he said. “And the only time she did, it came from a Turkish man on the street.”

Stephanie Kirchner contributed to this report.