Washington (CNN) — President Barack Obama will order immigration officers to deport “felons not families” as he wields executive power to shield five million undocumented immigrants in the most sweeping overhaul of the immigration system in decades.

Obama will reject claims he is offering a free pass to undocumented immigrants and argue that “the real amnesty” would be leaving a broken system as it is now, according to excerpts of his remarks released by the White House.

“Mass amnesty would be unfair. Mass deportation would be both impossible and contrary to our character. What I’m describing is accountability — a commonsense, middle ground approach,” Obama will say.

“If you meet the criteria, you can come out of the shadows and get right with the law. If you’re a criminal, you’ll be deported. If you plan to enter the U.S. illegally, your chances of getting caught and sent back just went up.”

Obama will lay out changes he is making to immigration laws without the consent of Congress. A key element of his plan is to instruct immigration authorities to prioritize expulsion action against gang members, felons and suspected terrorists rather than law abiding undocumented parents of U.S. citizens and residents and others, senior administration officials said.

The changes will offer those who qualify the chance to stay temporarily in the country for three years, as long as they pass background checks and pay back taxes. But they will not be offered a path to eventual citizenship or be eligible for federal benefits or health care programs. And, in theory, the measures could be reversed by a future president.

READ: What to expect in Obama’s speech 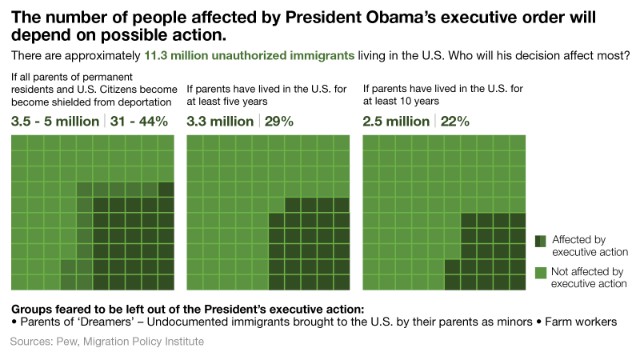 Republicans are slamming Obama’s use of executive authority as a mammoth presidential power grab. But aides said the President was tired of waiting to act and felt compelled to go it alone because House Republicans refuse to vote on a bill to fix the broken immigration system that cleared the Senate more than 500 days ago.

“Instead of working together to fix our broken immigration system, the President says he’s acting on his own,” Republican House Speaker John Boehner said in a YouTube video released before the president’s speech. “The President has said before, that he’s not king and he’s not an emperor. But he’s sure acting like one.”

But Obama will say he is acting in a manner consistent with action taken by every Republican and every Democratic president in half a century.

“To those members of Congress who question my authority to make our immigration system work better, or question the wisdom of me acting where Congress has failed, I have one answer: Pass a bill.”

Officials insist that Obama’s moves are deeply grounded in law and constitutional precedent, despite claims by Republicans that they represent an unlawful overreach of his authority as president and his oath of office.

“The actions you see here reasonably sit within his powers,” one senior administration official said, speaking on condition of anonymity to discuss the plans before the President speaks. “I think that they are bold and they are aggressive but they are in keeping with precedent.”

Congressional Republicans are weighing their response, juggling ideas that range from a government shutdown to holding up Obama’s nominees in the Senate.

The most far-reaching changes in Obama’s order will offer papers and work authorization to up to four million people who are undocumented parents of U.S. citizens or legal permanent residents, as long as they have lived in the U.S. for five years or longer.

Obama will also remove the upper age limit of 30 years old from a program known as Deferred Action for Childhood Arrivals (DACA) or Dreamers that allows those brought illegally to the country as children to stay, offering relief to thousands more people.

The program will cover anyone who arrived in the country before 2010 and will extend a previous two-year guarantee of relief to three years.

But White House lawyers concluded the president did not have the power to offer parents of those covered under DACA permits to stay in the country and work, a move that will disappoint some immigration reform lobby groups.

Senate Dems: Obama, we’ve got your back

Should these parents be deported?

In one concession however, parents of the so-called “Dreamers” will be removed from priority lists for deportation.

Officials said that the broad sweep of the immigration measures were within Obama’s powers because he was directing authorities to prioritize which groups of the 11.4 million illegal immigrants in the country should be deported.

“Deferred action is not a pathway to citizenship. It is not legal status. It simply says that for three years, you are not a law enforcement priority and are not going to go after you,” said one senior official. “It is temporary and it is revocable.”

Officials said law enforcement officials made similar decisions each day about which categories of offenders to target with prosecution and the president was simply charting a new way to apply existing immigration laws.

The new approach, which will begin to be phased in next spring, will include a more robust effort to target gang members, suspected terrorists, and felons.

It will also focus more sharply on undocumented immigrants who have recently crossed U.S. borders in a bid to slow the flow of illegal immigration, the officials said. New resources are also expected to be announced to secure borders, following claims that enforcement is lax and contributed to the flow of thousands of illegal child migrants into the U.S. earlier this year, which sparked a hot political controversy.

In moves likely be applauded by the business community, the administration will also reform immigration rules to make it easier for science and technology students to study in the U.S. There will also be a new program to attract entrepreneurs to come to the U.S. if they can show they have sufficient investors.

READ: Immigrants will be listening

Will GOP impeach Obama over immigration?

The changes that Obama will announce, however, fall far short of the reforms that could be enacted were Congress to pass a comprehensive immigration bill.

“He cannot just by fiat put the entire Senate immigration bill into law. He does not have that authority,” senior Obama advisor Dan Pfeiffer told CNN Thursday.

The president has no power to put undocumented immigrants on the long road to citizenship. He cannot grant permanent residence permits known as Green Cards, and all of his changes could be struck down by a future president.

Officials insisted that Obama’s moves were consistent with immigration actions ordered by presidents, including Ronald Reagan and George H.W. Bush, for decades. The magnitude of the numbers involved here though surpass anything any president had done before.

Republican leaders did not wait for Obama’s speech, from the East Room of the White House, to lambast the president and warned his moves could shatter slim hopes of cooperation with the new Republican Congress next year.

“If President Obama acts in defiance of the people and imposes his will on the country, Congress will act,” said Kentucky Sen. Mitch McConnell who will lead the chamber next year. “We’re considering a variety of options.”

Republicans have accused Obama of flexing his presidential powers in defiance of Congress. They are also highlighting his previous comments that he did not have the power to simply change the immigration system on his own.

“When, President Obama, do you mean to cease abusing our patience? How long is that madness of yours still to mock us? When is there to be an end to that unbridled audacity of yours, swaggering about as it does now,” Cruz said.

Texas Gov. Rick Perry, like Cruz, a potential 2016 Republican presidential candidate, said there was a “very real possibility” that his border state could sue the president over his actions.