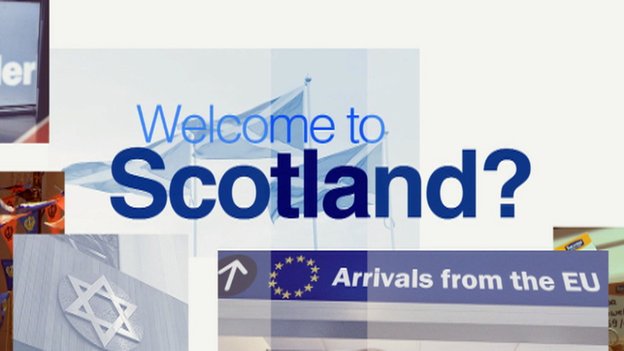 Almost two-thirds of Scots think immigration should be reduced, a poll commissioned by the BBC has suggested.

It suggests that Scots are almost as negative about immigration as the population in the rest of Britain.

The poll found that 49% wanted to see less immigration, exactly the same proportion as across Britain, and 15% said it should be stopped altogether.

This is in contrast to politicians at Holyrood who tend to agree that Scotland needs more skilled migrants.

In the YouGov/BBC poll just 5% said immigration should be increased – only slightly more than in England.

Some 27% of Scots said immigration was good for the country compared to 22% across Britain.

The poll suggested that 64% of people in Scotland wanted immigration reduced or stopped completely. The figure for Britain as a whole was 70%.

It found that women in Scotland were more likely to want immigration cut (69%) than men (60%).

Older people were much more likely to be against immigration, with 76% of over 60s in favour of a reduction as opposed to 43% of 18 to 24 year olds.

The poll, conducted by YouGov between 4 and 6 March, asked 1,100 Scottish adults a range of questions on the subject of immigration.

The questions matched those asked in a Britain-wide survey conducted in February 2014.

In Scotland, those with a higher income were more likely to welcome immigration, and men were more positive than women.

Demographics suggest Scotland’s population is ageing and, despite immigration-driven population growth over the past decade, the political consensus in Holyrood is in favour of more migrants of working age coming in to take on jobs and set up businesses which can grow the economy.

Despite the rise over the past decade Scotland still has a small immigrant population relative to England, especially London.

Average net migration to Scotland – the difference between people moving here and people leaving – is approximately 10,000 per year. For the UK as a whole it is about 300,000.

In 2010 Prime Minister David Cameron pledged to reduce net immigration in the UK to bring it under 100,000.

Questions remain about whether the people of Scotland share the views of their elected representatives.

You can also read:

Douglas Fraser on how Scotland has long dealt with immigration

Q&A: Why does immigration matter?

How do we define immigration?

Responding to the poll’s findings, Dr Marina Shapira of the school of applied sciences at Stirling University said negative attitudes towards immigration were not generally expressed as strongly in Scotland as they are elsewhere in Britain.

“They are exposed not just to Scottish politicians, they are exposed to politicians on the level of the UK. They have common economic space and common political space and for that reason people probably people don’t see themselves that much isolated from the factors that are being told to the rest of the population in Britain.

“We shouldn’t overestimate the huge power of the voice coming from the south in Britain and people also listening to that voice too.”

Humza Yousaf, the Scottish government’s minister for international development and external affairs, said Scotland needed skilled migrants because of the ageing population and that politicians needed to address public concerns about immigration.

The SNP MSP said politicians needed to help the debate rather than engaging in “kneejerk, populist” reactions. Mr Yousaf highlighted research on the economic benefits of migrants.

“When you look at immigration you have to be willing to break it down,” he said.

“I think if you ask most Scottish people and most people around the UK ‘do they want to see high-skilled migration to fill gaps?’ then the majority do not want to see that reduced.

“And studies have shown that, and so the Scottish government and politicians across the UK have a job to shape opinion on immigration and tone down the rhetoric, not inflame the rhetoric.”

David Coburn, the head of UKIP in Scotland and an MEP, accused politicians north of the border of failing to address people’s concerns about immigration.

He said attitudes in Scotland were only slightly different because of geography.

“Scotland is further away. Therefore it has not impacted quite as much yet, but the attitudes are just the same.”

“They have got the same problem with rates, with paying their bills, with the NHS.”