Immigration has emerged as perhaps President Obama’s worst issue — definitely for today, and maybe of his entire presidency — when it comes to public perception.

A new poll from AP-GfK shows more than two-thirds of Americans (68 percent) disapprove of Obama’s handling of the immigration issue in general. Just 31 percent approve — down from 38 percent two months ago.

When you separate those most passionate about the issue, the difference is even more stark, with 57 percent opposed and just 18 percent in favor. That’s more than three-to-one.

We tried to find an issue on which Obama has earned such poor marks, at any point in his presidency. And even on what was long his worst issue, the economy, his disapproval rating rarely peaked over 60 percent.

When it came to the Veterans Affairs scandal — a tough political issue if there ever was one — Obama’s disapproval peaked at 63 percent in Gallup polling.

The one example we could find where Obama’s numbers were as bad or worse? Gas prices. Back in May, with prices hitting a two-year high, 30 percent of Americans approved of Obama’s handling of that issue, while 68 percent disapproved.

The AP-GfK poll asks issue questions in a slightly different manner than other pollsters, giving people the option to choose neither but then trying to get them to pick a side they “lean” toward. (Other pollsters won’t offer the “neither” option.) This might lead to slightly more negative reviews for Obama and/or fewer undecideds. But even then, the difference is clear.

This is also hardly the first poll to show immigration emerging as one of Obama’s worst issues. A CNN/Opinion Research poll from last month showed Obama’s worst two issues were gun policy and illegal immigration. He scored worse on those issues than even on health care, the VA situation and the economy.

And that was before the current border crisis came to a head. 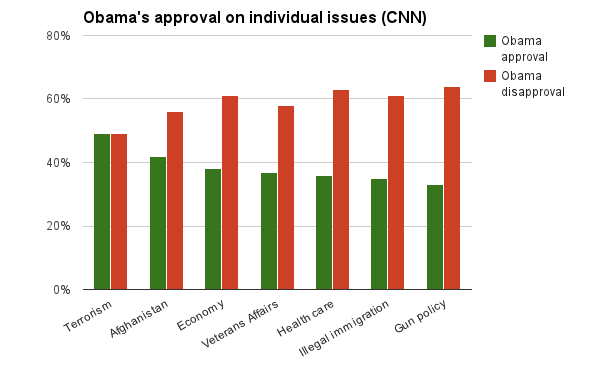 What’s particularly interesting about this is that, for much of his presidency, Obama’s position on immigration has been in sync with a strong majority of Americans who favor passing comprehensive immigration reform. He also won a huge victory among Latinos in 2012, growing his share of their vote by four points. Meanwhile, Republicans have struggled with whether their party should jump on-board with a reform package.

But as the years have gone on and Congress has failed to pass anything, Americans have also judged Obama poorly for it.

Now, with that as the backdrop and the crisis along the U.S.-Mexico border dominating the news, immigration is even more a liability for Obama. In fact, the issue has been so thoroughly turned on its head that Americans now favor Republicans more than Democrats on the issue, by a margin of 29-23, according to AP-GfK.

We’re not sure immigration is much of a voting issue heading into the 2014 election, but it’s certainly a legacy issue for Obama. And right now, it’s not helping in either area for Democrats.