FORTUNE — As the 2014 midterm elections draw nearer, the issue of immigration reform will be used as a wedge to pressure vulnerable Republicans into either angering their base and supporting reform, or alienating key demographics.

The politics of immigration are complicated, as are the economics. Researchers are split over whether immigration brings down the wages of low-skilled workers in the U.S. But with respect to other questions, like whether immigration promotes overall economic growth, the data is clear. It overwhelmingly does.

One way to highlight this is to compare economic growth over the past 30 years in the U.S. to other wealthy countries like France, the U.K., and Japan. A stylized fact often thrown about is that the United States, over the 80 or so years in which we’ve measured this sort of thing, has consistently grown faster than other countries due to its more enthusiastic adherence to classic capitalistic principals. Check out the graph below, which shows nominal yearly GDP growth from 1982 to 2012: 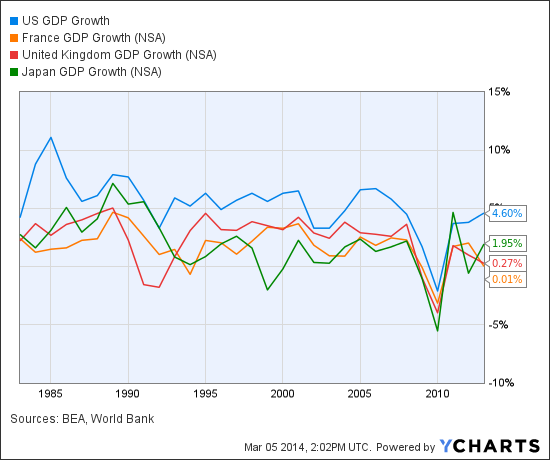 But one fact that often gets overlooked is that the U.S. population has been and continues to grow at a faster rate than its industrialized peers. Take a look now at GDP growth over that same period, this time on a per capita basis: 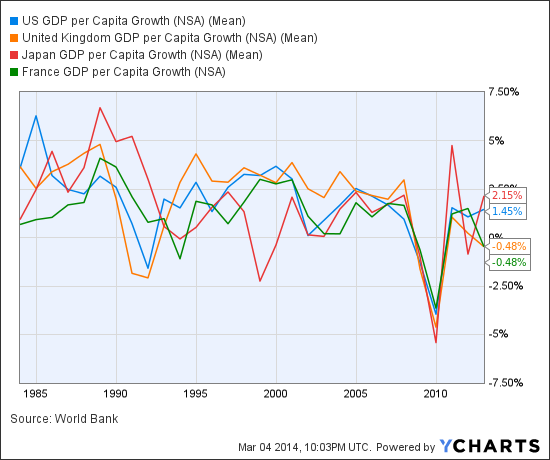 US GDP per Capita Growth data by YCharts

Here, the competition is much closer. In fact, the U.S. doesn’t even win. On a per capita basis, these countries grow at:

Take away America’s faster population growth and there’s a lot less of a difference between its economic growth compared to its wealthy nation peers. This puts into perspective, for instance, the current debate over healthcare reform in the U.S. Britain has socialized medicine, a fact that pushes the share of yearly GDP spent by the government close to 50%, yet it has managed to grow its economy faster than the U.S. on a per-capita basis, for which government spending represents a smaller share of GDP.

Thomas Piketty, the French economist responsible for compiling much of the data driving today’s debate over growing wealth and income inequality, raises this issue in his forthcoming book, Capital in the 21st Century. He points out that immigration is also the primary reason the U.S. has, for much of its history, avoided the large and unequal concentrations of private wealth that developed in Europe. He writes:

[Immigration] was the great contribution of the United States to global redistribution: the country grew from a population of barely 3 million at the time of the Revolutionary War to more than 300 million, largely thanks to successive waves of immigration. That is why the United States is still a long way from becoming the new Old Europe … immigration is the mortar that holds the United States together, the stabilizing force that makes increasingly large inequalities of labor income politically and socially bearable … for a fair proportion of Americans in the in the bottom 50 percent of income, these inequalities are of secondary importance for the very simple reason that they were born in a less wealthy country and see themselves as being on an upward trajectory.

In other words, not only does immigration boost growth, it also combats the kind of concentration of wealth that has fueled political unrest across the developed world. Population growth doesn’t make the rich any poorer, but it does diminish the power of wealth. A million dollars is going to be a much more valuable thing to have in a country in which the population and economy are shrinking than in a country where the population and economy are growing.