When Ernesto Perez heard President Barack Obama vow after the election that he still planned to use his executive powers to bring about immigration reform, the San Jose janitor took the promise as a chance at “a whole new life.”

Not only for him, but also for his family.

“Obama is the only hope we have right now,” said Perez, 44, who has lived in the country illegally for 19 years. He has four children, only one of whom is here legally.

“Because three of my kids live with me,” Perez said, “I’m always afraid that I will be separated from them. They need me. We need each other.” 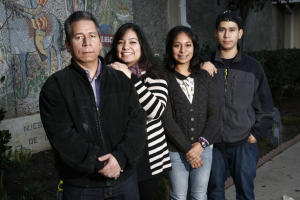 Ernesto Perez and his family are photographed in front of Our Lady of Guadalupe Church in San Jose, Calif., on Friday, Nov. 14, 2014. Standing left to right is Ernesto Perez, daughters, Angela, 18, Edith, 17 and son Max, 20. Ernesto is an undocumented worker who lives in fear that he could face deportation and become separated from his children. (Gary Reyes/Bay Area News Group)
(
Gary Reyes
)

As the postelection debate over immigration reform becomes increasingly venomous in Washington, D.C., discussion of the issue in the Bay Area’s immigrant communities has become more electrified. Amid the anticipation of what Obama might do, there’s excitement but also fear about backlash over one of the most contentious issues of our time.

Angry Republicans have declared that any executive action by Obama would “poison the well” and prevent the opposing parties from ever working together on the tinderbox issue. Some members of the newly empowered GOP last week began discussing how to use a “must-pass” spending bill to block unilateral action by the president.

Immigration advocates, however, are elated that even following the Democrats’ crushing defeat in the Nov. 4 election, Obama still seems willing to use his powers to prevent immigrants from being deported.

“We are heartened by the president’s reaffirmation of his commitment to take executive action,” said Priya Murthy of Services, Immigrant Rights, and Education Network in San Jose. “This is long overdue, and we hope it’s as expansive as humanly possible.”

Advocates speculate that a new executive order might be drawn along the lines of Obama’s 2012 “deferred action” order aimed at protecting 750,000 young immigrants brought here illegally by adults. A similar arrangement could be offered to up to 5 million illegal immigrants with long-term ties to the country. The announcement could come as early as this week.

“A lot of young people came out publicly and spoke, presenting a positive face,” Anoop Prasad, a senior staff attorney at the Asian Law Caucus, said of the 2012 order. “If Obama grants deferred action to millions of people, that will be a huge army in the streets, pushing for immigration reform.”

Of the estimated 11 million illegal immigrants living in the U.S., nearly 3 million live in California. They make up 10 percent of the state’s workforce.

Players on both sides of the issue are unnerved by not knowing if the president will make good on his promise — or how far he will go.

“He’s using executive authority to make an end run around Congress and the Constitution to grant temporary legal status and work authority to illegal aliens,” said Ira Mehlman of the Federation for American Immigration Reform. “It should be clear, after the election, that there has been a repudiation of Obama’s policies. The scale of what he’ll attempt is what we don’t yet know.”

But even among those who support executive action, the “scale” question is rife with anxiety.

“I hope he will grant deferred action and stop the mass deportations,” said Prasad, noting the record 2.4 million deportations under Obama. “I think he will actually use his power, but in a fairly measured way. I have high hopes but low expectations.”

Joe Guzzardi of Californians for Population Stabilization calls immigrant amnesty of any kind “just a terrible idea.” He worries about the economic harm of putting millions of additional legally protected workers into a stressed job market.

“That will have a negative effect on underskilled workers, minority workers and workers with less than a college education,” said Guzzardi, who added that no one is sure whether Obama is “bluffing or playing hardball to get something to his desk.”

In June 2013, the Senate passed an immigration reform bill that offered a path to citizenship for the undocumented, but also called for strong border security measures and continued deportation of immigrants with criminal records. But tea party conservatives prevented the Republican-controlled House from considering a similar bill.

Guzzardi is glad the House balked.

“Enforcement at the border has to come first,” he said. “And there must also be internal enforcement. This is an eternal cycle, pushed by illegal immigrant lobbyists, with no end in sight.”

Luis Chavez, chairman of the Latino Institute for Corporate Inclusion, which has offices in Oakland, also sees no end in sight — to efforts by reform opponents. He said the president gave Congress plenty of time to work the issue — perhaps too much time the last six years.

“Latinos have been in the shadows, paying into the country for a long time,” he said. “Millions have already given their labor to this nation, doing all the jobs Americans don’t want to do.”

Carlos Ramos, of the League of United Latin American Citizens, said he feels for the president as he wades into a perilous political arena against intractable foes, some of them threatening impeachment.

“It’s hard to enter a boxing ring with your hands tied behind your back,” said Ramos, LULAC’s deputy state director, “but there is support and belief that he must be the one to step forward and that now is the time.”

He doesn’t agree with immigrants who worry about political backlash from an enraged public.

“Many of us came here seeking a better life from countries with cycles of real, live torture,” Ramos said. “Backlash? We are not afraid. We’ve had that already — for a long, long time.”

Perez, the father of four, is not afraid either. He hopes Obama’s action will expand the scope of his life.

Countless undocumented immigrants don’t venture far in the towns where they live, he said, and are limited in available employment choices, schools and life experiences.

Perez dreams of traveling to Mexico — where he has not been for 11 years — to see his dad and brothers, victims of the country’s violence and poverty.

“They don’t have a chance to look for something better,” Perez said. “I need to go and see them where they are.”

With the GOP soon to be in control of both houses of Congress, many immigration reform activists say unilateral action by Obama is the only chance millions of illegal immigrants will have.

Said Antonio Chavez, the San Jose commander of the G.I. Forum: “It’s the light at the end of tunnel.”