“It’s time for the House to draft and pass a bill that reflects both our country’s humanity and its self-interest,” they wrote, citing immigrants’ purchasing power, unique abilities, and financial resources, as reasons for why it would be good for the country.

They wrote that the House should not throw up its hands on immigration, just because outgoing Majority Leader Eric Cantor lost his Republican primary to a tea party enthusiast who campaigned against immigration.

“They are telling us that immigration reform — long overdue — is now hopeless. Americans deserve better than this,” according to the editorial.

The article is the latest salvo from big business leaders to keep the pressure on lawmakers to overhaul the nation’s immigration laws.

That’s because U.S. businesses have a lot at stake. Hotels, restaurants, builders and farmers say they’re all facing labor shortages due to the current outdated immigration system. The tech industry wants lawmakers to make it easier for the nation’s best and brightest immigrant graduates to stay in the United States.

“You don’t have to agree on everything in order to cooperate on matters,” they said, offering their co-written op-ed as an example. “It’s time that this brand of thinking finds its way to Washington.”

Sheldon is CEO of Las Vegas’ Sands (LVS) and he and his wife Miriam are among the biggest donors to Republican candidates. During the 2012 election cycle, the couple and their companies spent $93 million on Republican and conservative efforts, according to the Center for Responsive Politics. 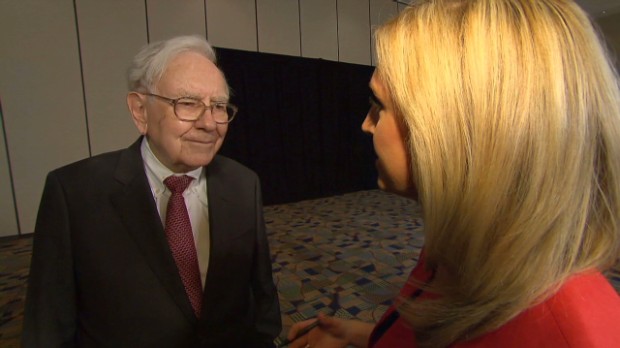 Warren Buffett is chummy with Democrats and has given more than $200,000 to President Obama and the Democratic National Committee over the years. He also is a regular at the White House. President Obama named a millionaire tax provision after him called the Buffett Rule — the rule was never enacted.

Bill Gates has given to both parties and has thrown his name behind some high-profile national policy efforts, including raising taxes for the 1% and supporting gay marriage.

They exhorted members of Congress to pass a “well-designed immigration bill,” ending the piece by saying it would lift the country’s spirits and stimulate the economy and that lawmakers should not forget the people who voted them in.

“It’s time for 535 of America’s citizens to remember what they owe to the 318 million who employ them,” they said.